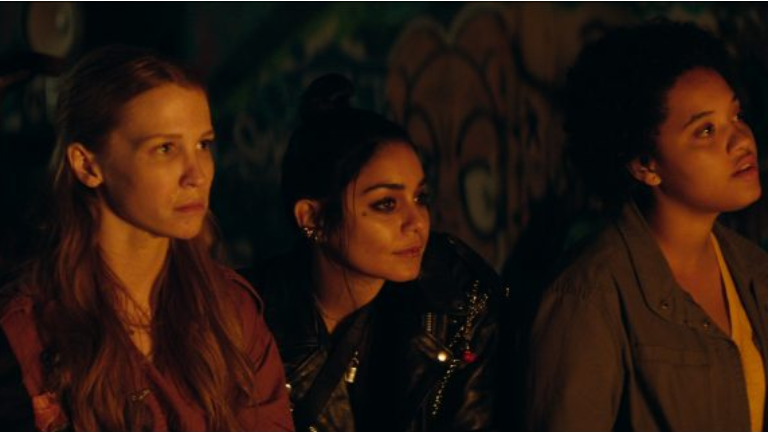 Vanessa Hudgens leads a band of vigilante women — played by a talented cast of up-and-coming cinematic stars — in the revenge thriller Asking for It, which was made in one of the burgeoning Oklahoma film industry’s most popular small towns.

Filmed in Guthrie in late 2019, Asking for It made its online world premiere last summer as part of New York’s 20th anniversary Tribeca Film Festival. Timely and compelling despite its flaws, the movie debuts in theaters, on digital and On Demand March 4.

The feature film directorial debut for Eamon O’Rourke, who also wrote the script, Asking for It follows Joey (Kiersey Clemons, Heart Beats Loud), a cheerful waitress at a small-town diner who is living with her grandparents (familiar character actors Patricia Belcher and Wayne Dehart) and trying to figure out what to do with her life.

Her life is drastically altered when her old friend Mike (Casey Cott, Riverdale) invites her to a party and rapes her. The trauma has a dramatic impact on Joey, and enigmatic diner regular Regina (Alexandra Shipp, X-Men: Apocalypse) not only notices but also takes the wounded dove under her proverbial wing.

They also guide a roaming band of fearsome vigilantes called the Cherry Bombers, who get women out of dangerous situations, help abandoned youngsters off the streets and mete out vengeance on abusive men, particularly those who have managed to escape the justice of the legal system.

Although Joey is relatively young and wide-eyed, Regina is determined to bring her into the Bombers, over the objections of the jaded Beatrice (Hudgens, who is much more Spring Breakers than High School Musical here).

Joey is drawn to the ferocious but supportive group — which also includes self-made explosives expert and former singer Lily (Leslie Stratton, “Ted Bundy: American Boogeyman”) and trash-talking sharp-shooters Jett (Leyna Bloom, “Port Authority”) and Angie (Lisa Yaro, “It Comes”) — and plays a key role in helping them bring down a college fraternity that has made sexual assault a core value.

But the Cherry Bombers are taking on a much more formidable foe in Mark Vanderhill (Ezra Miller, Justice League, playing rather deliberately and effectively against type), an online pickup artist turned gun-toting alt-right icon. Vanderhill is the leader of the growing Men’s First Movement, which preaches that men are naturally made to dominate and subjugate women, and has formed a nasty alliance with the ruthless Sheriff Morrill (David Patrick Kelly, The Crow), a corrupt lawman suspected of running a sex-trafficking ring.

Luke Hemsworth (West World) — yes, the older brother of Chris and Liam — does a solid job playing the good cop as Logan County Sheriff Vernon, a small-town officer who has a fraught past with Sal, while 2010 Oscar nominee Gabourey Sidibe (Precious) is criminally underused in a small role as part of the Cherry Bombers’ underground network of supporters.

Although the style brings an intensity and urgency to the story, Asking for It could use a little more substance. Despite a strong cast of emerging movie stars — Shipp and Clemons are definitely ones to watch, while Hudgens and Miller continue to build their burgeoning careers — the characters seem underwritten. O’Rourke gives the Cherry Bombers harrowing, ripped-from-the-headlines back stories, but it would be nice if these women could be more than their trauma.

Still, the director shows promise with his first feature-length outing: It may lack any semblance of subtlety, but Asking for It fearlessly takes on the patriarchy, addresses timely issues like racism, homophobia and rape culture and provides a showcase for several LGBTQ+ actors and performers of color.

For Oklahoma film fans, “Asking for It” spotlights the beautiful Logan County landscape and Guthrie’s Victorian charm, but some of the actors’ attempts at an Okie accent are downright cringe-worthy.

In a growing trend, O’Rourke closes “Asking for It” with a land acknowledgement, reminding viewers of Oklahoma’s history as the landing place for many forcibly removed Native American tribes.