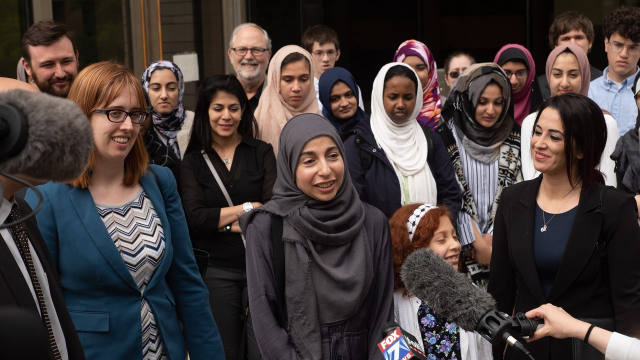 Director Julia Bacha’s documentary Boycott is a powerful call for Americans to protect our First Amendment right to dissent. The United States has a history of boycotts influencing change, such as the Montgomery Bus Boycott in 1955 that ended racially segregated seating on city buses.

Yet as this 2022 SXSW documentary shows, some workers now feel pressured to choose between their livelihoods and their support of causes that don’t align with their beliefs.

Bacha focuses on three people who sued their states after refusing to sign oaths prohibiting them from boycotting Israel, whose occupation of the West Bank has triggered accusations of civil rights abuses. Modeled after the anti-apartheid movement in South Africa, the Palestinian-led Boycott, Divestment, and Sanctions movement encourages economic pressure on Israel to withdraw from occupied territory and follow international law.

Regardless of where viewers stand on this international issue, however, Boycott puts the broader matter into engrossing context. Next to voting, “withdrawing my time, money, and labor until things change” through a boycott is one of the few ways individuals have to influence our government, says Vince Warren, executive director of the Center for Constitutional Rights.

The American Civil Liberties Union represents the plaintiffs. (We won’t spoil the outcomes of their cases here.) Bahia Amawi, a Palestinian-American speech pathologist in Texas and married mother of five, lost her job after not signing a state contract promising not to demonstrate against or boycott any businesses that don’t support Israel.

Likewise, Mikkel Jordahl, an Arizona attorney who provides state-paid legal services to inmates, lost his paycheck. Jordahl had visited the Middle East (Amawi has relatives there) and said he witnessed civil rights situations. Not wanting to leave his clients in the lurch, though, he worked for free.

Over in Arkansas, Alan Leveritt, founder and publisher of the free community newspaper The Arkansas Times, lost advertising from state colleges over not signing a similar pledge. His objection was on principle. For starters, he didn’t see what bearing this international issue had on his readership.

Boycott takes a complicated turn through foreign influence and funding in American politics on these particular bills, which some interviewees call a template for prohibiting support of other issues. For instance, Texas in 2021 now has laws punishing those who boycott fossil fuels and firearms, the film notes.

Also problematic are lawmakers who just sign on to such matters without debate. While interviewing Arkansas State Sen. Bart Hester, the Republican who sponsored his state’s law, Bacha happened to meet Greg Leding, an Arkansas state senator who is a Democrat. Leding couldn’t remember how he’d voted on the bill and regretted “not knowing more about the issue” beforehand.

Hester doesn’t fare much better. At first, he says he drafted the bill to support and protect Jews as “God’s chosen people,” then says he didn’t talk with local Jewish leaders because “I don’t agree with [them].”

When Bacha speaks with Rabbi Barry Block, head of Temple B’nai Israel in Little Rock, Arkansas, the state’s largest synagogue, he supports the position of The Arkansas Times. While Israel is deeply important to him, he said, but “I was appalled that a newspaper would have to sign an oath that it would not participate in any kind of political action.”

Political support shouldn’t be coerced, Boycott reminds us. That’s one reason Amawi wanted to take a stand: “It is our responsibility to fight, to protect, and to preserve free speech for our children.”