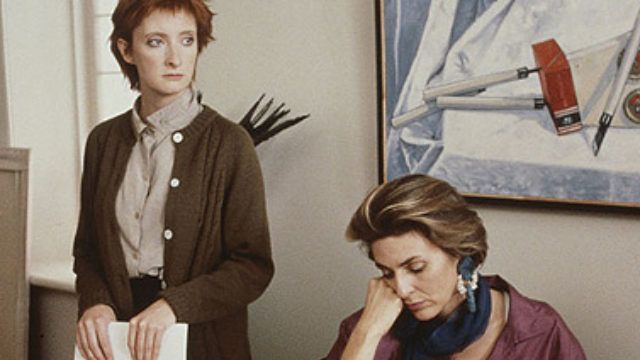 “Isn’t life the strangest thing you’ve ever seen?” For Polly (Sheila McCarthy), the naïve innocent at the center of Canadian filmmaker Patricia Rozema’s feature directorial debut I’ve Heard the Mermaids Singing, the world is a source of endless wonder, one that she enjoys making photographs of to hang all over her ramshackle home in Toronto.

Polly barely makes a living, as she is an inept office worker who rarely gets assignments from her temp agency, but her fortunes change (modestly) when she is sent to the Church Gallery to assist “The Curator,” Gabrielle (Paule Baillargeon), an art dealer and would-be painter with ambitions to immortality through art. Polly herself has no ambitions, no dreams she wants to realize. She wanders off into flights of fancy, her imagination providing the satisfying life she doesn’t seem to know how to achieve—or even want—in the real world.

She finds working for The Curator interesting, and Gabrielle seems to find her presence comforting. When Gabrielle’s former lover, a talented painter named Mary (Ann-Marie MacDonald), comes back into the picture, Polly has something with which to compare her feelings for The Curator. She loves The Curator, not as a romantic partner, but rather as a magical presence in whose light she can bask.

It is the magic The Curator brings into her life with her stylishness, erudition, and complexity that gives Polly such joy. Through perhaps a less healthy influence The Curator exerts, Polly starts to have ambitions for her photography, anonymously seeking The Curator’s approval for her work and exposing herself to the possible destruction of the pure pleasure she has always taken in making photographs.

I’ve Heard the Mermaids Singing is very sweet and very funny. Rozema, who also wrote the screenplay, pokes at the pretensions of the 1980s art establishment. Gabrielle and a museum curator (Richard Monette) go through her gallery commenting in the most abstract language on the work of an up-and-coming painter—a skewering vision of people talking themselves into assigning values to a static image when an emotional response is called for. In another scene, the trendiness of Japanese food that the decade ushered in offers McCarthy an opportunity for some physical humor, as she tries to negotiate a restaurant’s low table and legless chairs with her gangly body. Polly struggles with her chopsticks, and when Gabrielle asks her what she wants, misinterpreting the question, she very honestly says what many of us would in that circumstance: “A fork.”

The title of Rozema’s film comes from T.S. Eliot’s poem, The Love Song of J. Alfred Prufrock (“I have heard the mermaids singing, each to each. I do not think that they will sing to me.”). For some, this line refers to Gabrielle, who desperately wants to make one really good painting that will be lauded past her lifetime, but who lacks the talent to do so. For me, however, the word “love” in the poem’s title is the key to understanding Rozema’s point of view.

While Polly comes dangerously close to being a manic pixie dream girl sent to awaken Gabrielle to living in her life instead of worrying about her life after death, Mary moderates Gabrielle’s bloodless ambition by loving her unconditionally and seeing the love Polly put into her photographs as enough to justify their existence. Polly herself defends Gabrielle from a jealous artist by voicing her feeling that we should be grateful someone can do great work even if we ourselves cannot.

In the final scene, Gabrielle and Mary visit Polly’s home to view her photographs. When she opens the back door of her home to show them both more of her images, they step into the living world that she finds so strange and wonderful.