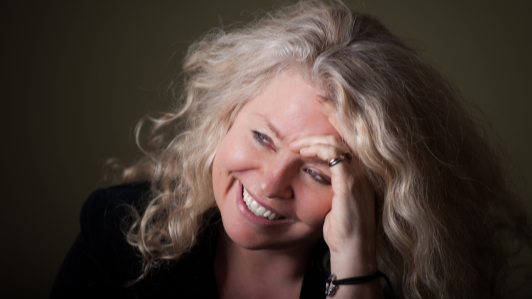 Writer/director Patricia Rozema had no idea in 1987 that her feature debut I’ve Heard the Mermaids Singing would become a classic and ranked in the Toronto International Film Festival’s Top 10 Canadian Films of all time. Rozema simply made the film she wanted to make.

“I never imagined [its continued success] all these years later; I could not even imagine it at the time. It was made for so little money. I was absolutely floored by how well it was received,” says Rozema from New York City just before the US theatrical release of the 4K restored I’ve Heard the Mermaids Singing presented by Kino Lorber at the Metrograph. The film will screen at Alamo Drafthouse in Los Angeles starting March 18 before expanding to select cities nationwide in spring 2022.

Rozema still had her doubts even when I’ve Heard the Mermaids Singing was selected for the 1987 Cannes Film Festival which required the 16mm print to be enlarged to 35mm. She remembers “sitting in the theater and hearing a double wave of sound: first, the laughs from the audience hearing the English [dialogue] and then the laughs from those reading the subtitles. And my favorites sound: a gasp of recognition. Then they leapt to their feet for a very long standing ovation.”

Rozema says she thinks of Polly “as a Buster Keaton character. She’s serious — you never see her smile. She just gets things wrong and is of such pure intent. I love malapropisms; she speaks inelegantly but it’s about insecurity.” A scene in a Japanese restaurant, for example, is a masterpiece of deft character comedy as the unsure Polly blindly orders “number 13” which turns out to be a slab of slimy octopus and proceeds to battle it with chopsticks.

“It was such a short timeline in that Japanese restaurant. I kept laughing and ruining take after take,” Rozema says. “Sheila is a comic genius. She was a dancer and had never been on film before and she was just brilliant.”

But the film’s deeper concerns are about art and artists and who gets to decide. In a revealing scene, Gabrielle coldly dismisses the photographs that an eager Polly sends anonymously in the mail.

“I was giving myself the confidence to be the artist I wanted to be with this film. And I was trying to undercut the authority or convince the viewer and myself that if you work hard and the intent is pure, you deserve to make what you want to make. Your voice is as valid as anyone’s,” Rozema says. “That’s part of the success of the film over the years.”

The film’s success is even more impressive when one considers that 1987 was several years before the advent of the “New QueerCinema” of the early 1990s and certainly well before conciseness about diverse screen roles for women. Rozema’s film boasts three central women characters and a lesbian storyline that’s simply part of the characters’ lives, a theme Rozema explored further in “When Night is Falling” (1995).

“I took a page from My Beautiful Launderette where [the viewer] is well into the story before a boy kisses a boy. It’s long after you get to know the characters,” she says. “I was working hard not to be off-putting. I was raised a Calvinist. I had so much self-loathing and need to be liked. I was going the extra mile to try to be approved of and that might be why I leaned heavily into the charm and the humor on this one. I wanted it to have representation of three different forms of sexuality. Each of those characters was a side to myself.

“I remember a guy coming up to me in Cannes and saying, ‘Wow, I never thought it was possible to make a movie with no men in it and it works! Like he was in a state of awe. That’s never been said about a movie with only men in it.”

Rozema studied philosophy at Calvin College in Michigan so she wasn’t a filmmaker steeped in cinema. “I grew up in a Dutch Calvinist world, I barely went to a cinema until I was about 19. My parents would take the knob off the television set when they went out for the evening,” she says. “I can remember a press conference and someone [referencing] Billy Wilder and I answered ‘I don’t know his work’ and there was an audible gasp.”

Rather than imitating the masters, Rozema was “devoted to finding my own rhythm and finding my own tone.” Besides comedy, her body of work includes literary adaptations (Mansfield Park) and apocalyptic horror (Into the Forest). She notes that another retrospective will pair I’ve Heard the Mermaids Singing with her 2018 feature Mouthpiece.

“I think of it as a sister film to Mermaids. It was done with the same kind of anti-authoritarian or irreverent relish. It’s an examination of the female psyche and it’s funny as well at times,” she says.

With several projects in the works that she can’t yet talk in detail about, Rozema says she’s about “to hit my stride. I can use those skills I’ve acquired along the way with a renewed confidence that comes from advanced years…. The nest is empty; I parented with all the gusto and love that I put into everything else so there’s a new burst of activity. That’s the plan.”