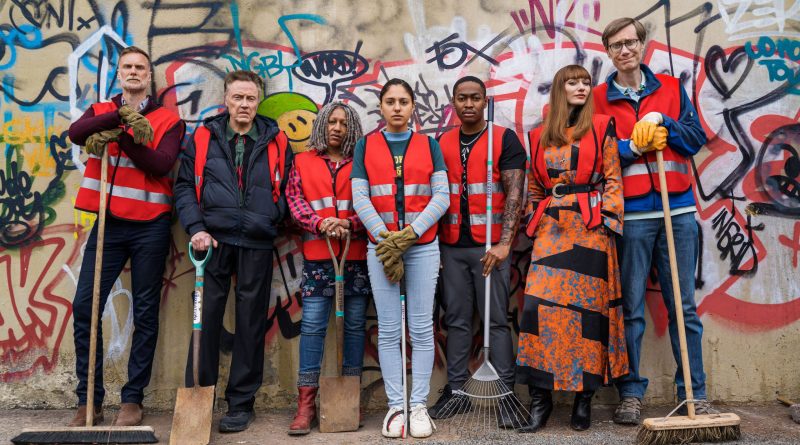 Trust Stephen Merchant — all 6 feet and 7 inches of him — and his humor and insight. Known for his collaborations with Ricky Gervais on The Office and Extras and as an actor on those television rockumentaries and in movies, such as Jojo Rabbit, Merchant brings both talents to a brilliant, six-part British dramedy, The Outlaws.

The title characters comprise a group of seven scofflaws from, yes, seven walks of life. Instead of jail, each has been assigned to punishment in Community Payback. They include a titled and entitled influencer, Lady Gabriella, she of thousands of followers, who disdains Jesus for having only 12. She wears her red vest fashionably as she sashays with the right-wing capitalist, the agitator, the Indian brainiac, the thief (or is he?), the failed lawyer, and the American forger.

But, again, trust Merchant: these labels are superficial. Not only do Merchant and his writing team for the series give depth and breadth to each character. Each of the seven has a foil in the family. For example, the Black radical is disparaged by her calmer daughter, who calls Mum a “balled-up fist of fossilized rage.” Also, after a big bag of money falls into their hands, the writers layer the plot to force the Gang of Seven to face a real gang.

To this group, Merchant adds the guard, an Inspector Clouseau-type, who reads Lee Child on the job and who orders in couplets: “Less flirting, more exerting!” She wants so badly to be a real police officer that she curtsies before the detective sergeant sent to find the real criminal. There is little doubt, given the genre, that the seven, despite their differences, will form a community. Delight comes in how they do it.

Among the laden raft of actors are Christopher Walken as the lying American, who dances with a broom; Clare Perkins, perfect as the Black revolutionary; and Eleanor Tomlinson as the angry “celebrutante.” Jessica Gunning nails role of the guard. Merchant plays the bungling lawyer, who declares that he’s “had library books out more often than he.”

The Outlaws is charming and political, funny and finessed. Trust Stephen Merchant to fold a series together like sugar in egg whites.