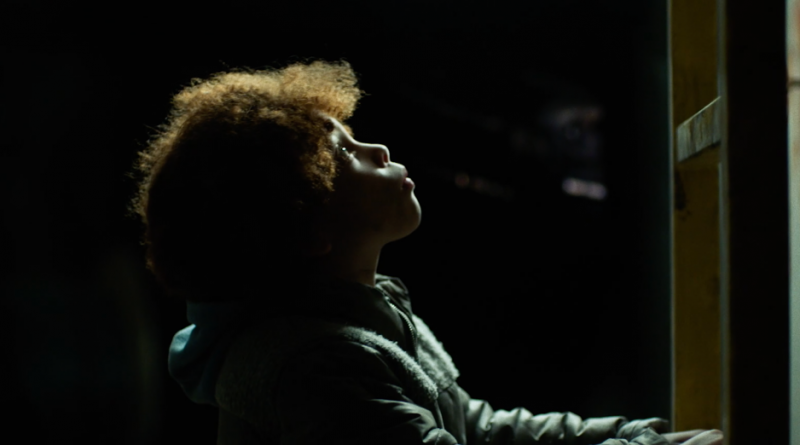 Early in the drama Topside, a young girl curls up on a dirty floor in a sunbeam slicing into the underground tunnel where she lives. Later, she talks about seeing the stars, but she’s barely seen the sky.

It sounds like a dystopian science-fiction setup, but Topside is all too real, an unflinching slice-of-life about a homeless mother and daughter living in the subway tunnels below New York City. Making their feature debut, co-writers and directors Celine Held and Logan George immerse viewers in a world full of aching poverty and fierce love.

A quote from Jennifer Toth’s acclaimed 1995 book The Mole People: Life in the Tunnels Beneath New York City opens the film, leading to a wide shot of five-year-old Little (newcomer Zhaila Farmer) finding that spot to nap in the light. Director of photography Lowell A. Maxwell (Thunder Road) and Farmer’s natural performance convey Little’s enchantment as she watches the dust motes dance in the air, content with the sounds of dripping water and the subway’s distant rumble.

Yet even though Topside frames many shots from Little’s point of view, earning a directing award at the 2020 SXSW film festival, the film doesn’t sugarcoat Little’s situation. In production notes, Held and George said they based their story on interviews with more than 50 people experiencing homelessness in New York City, which they crafted into two short documentaries, 50 Moments and Mornings. That background and shooting in an unused tunnel in Rochester, New York, gives the film a wrenching realism.

We’ve no idea how long Little has lived below ground, but the girl accepts this with a child’s readiness, just as she knows that her mom, Nikki (Held), will return through a hatch from the world above. Until she does, Little busies herself with finding treasures like a barrette or an earring in a pile of rubble and grime, watching a tablet the community shares, or eating cold food from a can.

Nikki supposedly is working on a better place to live than the hovel they’ve patched together from pallets and other scraps. Yet she’s also a heroin addict, which she hides from Little. Similar to the homeless mom in Los Angeles in the indie feature I’m Fine (Thanks for Asking), Nikki creates a fantasy for her daughter. She decorates their home with string lights and Little’s sparkly things, telling the girl they’ll get away once the child sprouts wings. Little swears she can feel them trying to grow.

The plot in Topside takes a bit of time to kick in, although the first act establishes that Little’s tight-knit underground community is kinder than what she’ll find later. One woman reads her a story, and another lets her pet his dogs. Even John (hip-hop musician Fatlip), who deals drugs to Nikki, has compassion for Little. He feeds Little dry cereal and asks her basic arithmetic questions. When she miscounts on her fingers, his face pains with a future he doesn’t want for her.

John urges Nikki to take Little to school, but in the meantime, the city transit authority plans to renovate the tunnel, breaking up their haven. Afraid the city workers will separate her and Little, Nikki flees with the child, sending them on a harrowing gamut topside.

Handheld pans and closeups as the two first emerge onto the street depict Little’s shock at all the people, sirens, bustle, and light. Farmer also conveys her fear and overwhelm. She shuts her eyes, cries, and buries her head in Nikki’s shoulder.

Topside loses some immediacy when it switches to Nikki’s point of view, but to the film’s credit, it never seems judgmental toward this woman, instead showing her fragility and desperation. She hides out in an empty church and later a drug den, where she agrees to “work” for the supplier and pimp there (Jared Abrahamson, American Animals) while trying to pull herself together. The tension in this sequence had me on edge for her and her mother’s safety.

The film builds toward a heartrending climax aboard the city’s subway trains filmed partly in real time with hopeful glimpses along the way: an angel in the ceiling of an empty church, a bird hopping on a subway platform before taking flight. Nikki has a tough if inevitable decision to make; but Held’s performance makes clear why she kept pushing it off. She loves this child but also sees in this sweet, trusting face someone who views her much better than she views herself.

Whether aboveground or below, Topside gets under your skin.