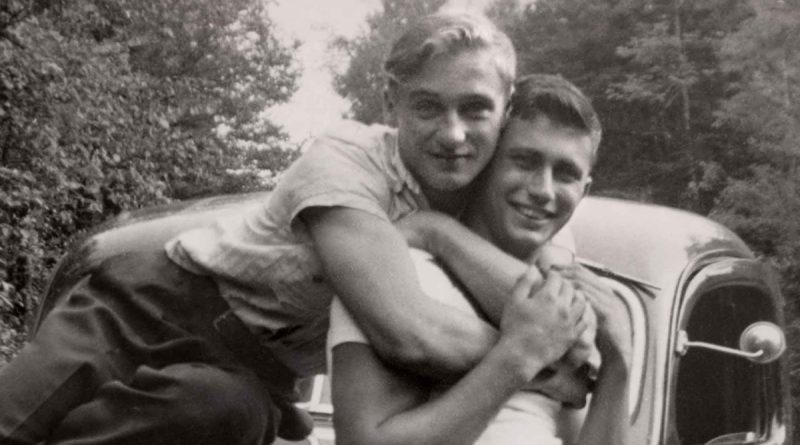 Exhausted by hatred? Weary from war? There’s a doc for that. 100 Years of Men in Love brings love into focus. For an hour, this beautiful documentary celebrates a history of the love that dared not speak its name, and it does so with eloquence and charm, attitude and gratitude.

The subtitle is An Accidental Collection. It’s “accidental” all right. The collectors, Hugh Nini and Neal Treadwell, found a picture of two men. “Look at their eyes,” instructs Nini. That is the men’s mantra through their narration of their collection. “Look at their eyes” lest you think the subjects can be dismissed as drunken sailors or corporate officers in a grip ‘n’ grin shot for publicity.

When the collectors found that first photograph, they thought it was a rare bird. Then they found another. And another. They found similar photos at estate sales and flea markets and in shoe boxes. They found more than 3,000 photographs of men in love.

They sorted them into tiers. The first tier is just two men standing next to each other, maybe with the toe of the shoe of one claiming the shoe of the other. Another tier includes men lolling on cars; the top tier shows men entwined in sheets.

These pictures have been shot over the past 100 years. Through most of those years, these men could have been jailed for lewd and lascivious behavior, yet they recorded their love for posterity.

Treadwell and Nini produced a book, titled LOVING A Photographic History of Men in Love 1850’s – 1950’s. Sure, you can buy the book, but what you would miss is what film adds to the collection. For one thing, under the direction of Emmy-winning David Millbern, the documentary moves with Ken Burns swipes. In the interstices, he printed pertinent quotes from gay men, such as Gore Vidal and Walt Whitman.

For another beautiful thing, the documentary presents Nini and Treadwell narrating. These two partners finish each other’s sentences and encourage each other’s notes. They sweetly reveal what’s written on the back of the photos: “two Sad Sacks 1945,” “me and Harvey 1929,” and “more than palsies.”

Nini and Treadwell say their “collection is a love letter to the world.” It streams on Here TV, the first and largest LGBTQ platform in the U.S.

100 Years of Men in Love offers a respite from the hate in the world and does so brilliantly. As the curators say, seeing these pictures “makes your heart sing.”