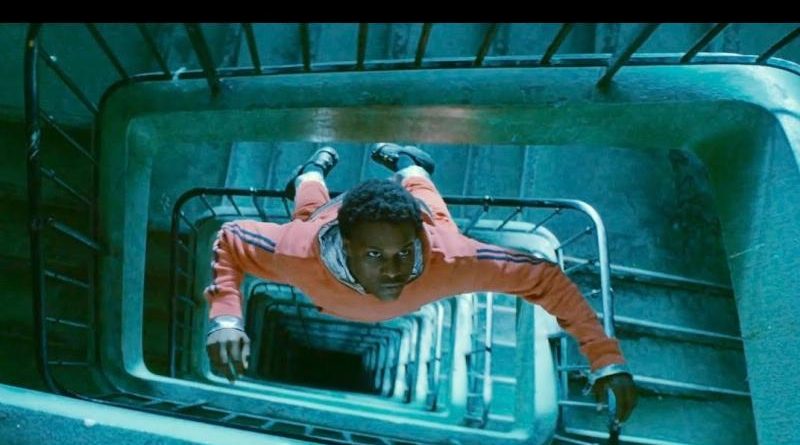 Cité Gagarin was a housing project on the outskirts of Paris in Ivry-sur-Seine built in the early 60s by members of the French Communist Party, which benefitted by overwhelming support due to their role in the French Resistance in WW2. It was named after Yuri Gagarin, who attended the opening of the building. Fortunes faded over time for what was once a showcase, and Gagarine became one of France’s “sensitive urban zones”, or what one Le Figaro journalist called “no-go-zones”, because they were so dangerous that the police wouldn’t enter without reinforcements. This is the setting for French writer/director team Fanny Liatard and Jérémy Trouilh’s narrative feature Gagarine, which they filmed in the housing project just before its demolition.

For those who live in this cinematic version of Gagarine, it’s as if they are on their own home-world, their own planet. They share the space in communal fashion, looking out for each other. Everyone knows everyone. That’s a good thing for teen optimist Yuri (Alseni Bathily) since his mother has left him behind without word to go live with her new baby and partner. Other residents care for and check on him, though, including Fari (Farida Rahouadj) who feeds him whenever she can get him to stay still. You see, he’s on a mission to keep the building clean, operational, and safe, since no one official seems to care enough to do so. It’s a full time job, even for a 16 year old.

A connection is made from the beginning between the character Yuri and Yuri Gagarin, in several of the many spliced-in clips of real world space exploration. The movie opens with footage of Yuri Gagarin going into space, then attending Gagarine’s inauguration. Yuri has always seen the Gagarine as his starship, one he must maintain just as he would a fragile capsule in space.

After government officials declare they should evacuate the residents of Gagarine within six months and demolish the building, a voiceover of the inspector lists all the substandard elements of the housing project. There’s asbestos in the walls and ceilings, cracks everywhere, the fire alarm doesn’t work, and the dust levels in the air are dangerously high. Still, nearly everyone wants to stay. They’d be leaving their fellow residents, who are like family, but they’re told to leave, so they do.

Everyone except Yuri. He stays as the Gagarine is prepared for demolition, using refuse to create his own insular space station on the 7th floor, complete with greenhouse for vegetables. He methodically goes apartment to apartment finding what he needs, all the while watching and listening to an astronaut recording from Earth’s orbit. Wandering through the building outside his safe space, Yuri himself looks like an astronaut on an increasingly bleak alien landscape.

Throughout all this he is spending time with a girl named Diana (Lyna Khourdri), in friendship and perhaps something more. As Romani, Diana has her own insular and outsider community. Yuri is able to show her the Gagarine from his perspective, and she follows him into a sort of alternate reality they share of living in space, making both feel less alone.

The themes of isolation and community examined in the film are introduced in poetic and imaginative ways, perhaps because the project started through conversations Liatard and Trouilh had with longtime residents of the real building, who loved it, even in all its disrepair. The cinematography and visual language of the film are beautifully balanced between expressing a lived-in feeling, a sort of celebration of people over property, and an otherworldly, often stark quality of an outdated space station, something the Gagarine, an example of the brutalist architecture of the era, conveys perfectly.

There is a magical quality to much of Gagarine that lifts the viewer out of what, in reality, is a story of 16-year-old in mortal danger. We join Yuri above the mundanity and precariousness of his existence, and in being there, we have all the more empathy for the character. As the story’s end unfolds, we are no more aware than he is of the difference between reality and a dream. It is an unsettling and compelling place to travel as a filmgoer, but a journey worth taking.