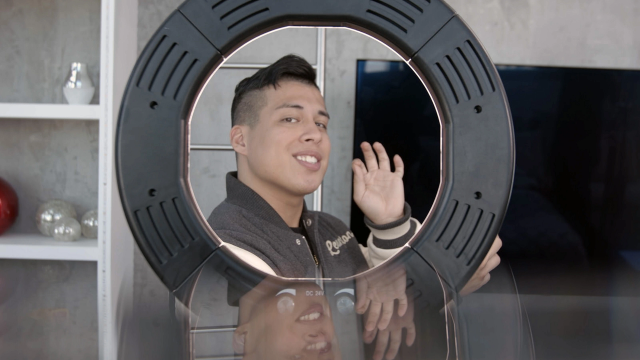 With more than two billion users—a significant chunk of them under 25—TikTok has become an app that launches careers, earns exponential income, and scares the heck out of privacy advocates, competitors, and even its users. The documentary TikTok, Boom., currently making the festival rounds from Sundance to SXSW to CPH:DOX, tackles almost too much in an hour and 37 minutes.

Yet even where it doesn’t probe deeply, the film advocates for examining this platform that carries more dangers than its dance and lip-synch videos indicate.

Director Shalini Kantayya previously explored another uneasy relationship with technology in 2020’s Coded Bias, unspooling how a researcher learned that facial recognition algorithms can’t read dark-skinned faces accurately. TikTok, Boom. also outlines peculiarities about the TikTok algorithm, which is so precise that users find it eerie. One woman jokes that her family couldn’t tell she was bisexual, but the app figured it out quickly.

Yet the film also looks at the geopolitical aspects of the app, owned by ByteDance, a Chinese tech company. TikTok now exists in over 150 countries worldwide, a behemoth collecting personal information that no one in the film really knows where it goes. TikTok’s interim CEO appears in archived footage saying the data is backed up in Singapore, not China, but the Chinese still wield a substantial influence.

Co-produced by former NFL star and civil rights activist Colin Kaepernick, TikTok, Boom. features interviews with several creators, such as Spencer X, a twentysomething earning a career through beatboxing snippets (much to his parents’ confusion). Yet the film is most fascinating when it looks at whom the platform promotes and whom it “shadow bans,” or hides from viewers.

Two investigative journalists, one in Berlin and another in Brazil, walk through the internal moderation guidelines they obtained from a whistleblower. The translation from Chinese to English is awkward, but the guidelines say to hide content from people with physical or mental disabilities, signs of autism, birthmarks, “facial disfigurement,” too many wrinkles, and more.

The guidelines phrase this as wanting to protect people whom the platform thinks are susceptible to bullying, but TikTok has no problems with sexist slams against women such as Deja Foxx, a San Diego, California, creator who is politically active. “The posts where I’m showing more skin do better,” says Foxx, who shows herself swimming in a bikini in some videos while in a suit in others.

Likewise, several black creators found no one viewing their videos when they mentioned racism, George Floyd, Black Lives Matter, and related issues. Under pressure, the platform called this a “technical glitch,” which creators interviewed here found hard to buy.

One teen who is Afghan-American developed a work-around to talk about human rights accusations against China involving the genocide of the Uyghurs, a mostly Muslim population in that country. She curled her eyelashes while encouraging viewers to research and protest the issue. TikTok yanked her video after a few days.

TikTok, Boom. briefly covers the Trump Administration pouncing on the platform as a national security risk and Facebook’s Mark Zuckerberg attacking it once he couldn’t purchase its predecessor. However, the film regrettably spends little time on the platform’s psychological effects and potential dangers to youngsters, such as the mash-ups that older men create of them “kissing” teen girls who pout at and kiss their cameras. Child predators existed before social media, one data privacy lawyer says, “but they didn’t have direct access to your child’s inbox.” One 16-year-old dancer agrees he’s glad that his father screens his messages because of the oddness he receives.

Also disturbing is how the algorithm, in serving up what it thinks a viewer wants, can reinforce social disparities and shape a person’s identity. Even those who enjoy having a voice and earn their living on the platform, such as Foxx, find this uncomfortable, likening it to an “abusive relationship.”

“I don’t know what it’s like to live in a world where I’m not being perceived. Always,” she says. “And it’s this tug of war between that’s kind of what I want and it’s kind of the thing I fear the most.”