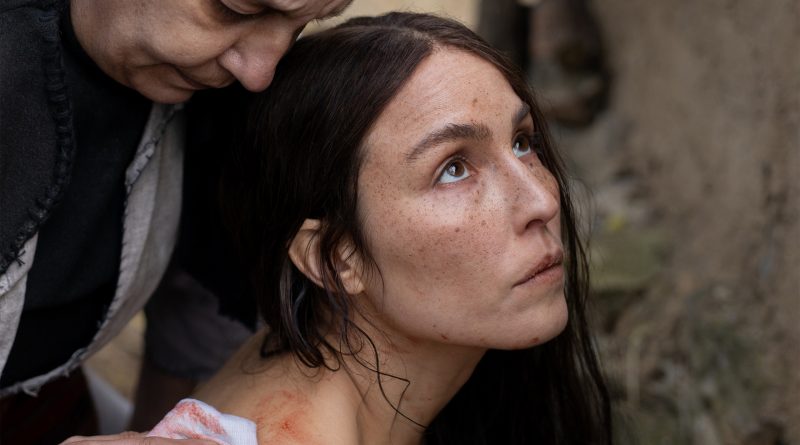 In a desolate 19th century Macedonian village, a legendary witch with a penchant for shape-shifting haunts the imagination of the small community as she has for centuries. Seeking animals and newborns for her life-blood, a deal made with one frightened woman desperate to keep her baby for just a few more years places the young Nevena (Sara Klimoska) in the care of the so-called “wolf-eateress”, but as the latter herself observes, she is no mother, and this is no affectionate, care-giving role by any means. Learning the craft from her monstrous elder, it is Nevena’s ability to take the forms of different creatures – both animal and human – that largely structures You Won’t Be Alone, drifting as she does from skin to skin, learning about life and, ultimately, discovering her own humanity.

As Nevena comes to life through the bodies of different actors – both men and women and, at one fascinating moment, a dog – the different manifestations are tied together through Klimoska’s simple, barely grammatical voice over narration. But it is precisely because of its lack of polish, not despite it, that the poetic inflections that dominate this exquisite film become even more pronounced, moving and sincere. As one of the first vehicles for Nevena’s body-hopping, Swedish actor Noomi Rapace will of course be the big name drawcard to the film, and although her on-screen time is limited she does not disappoint – Rapace significantly also was an executive producer on the film, clearly recognizing the cinematic jewel that it is.

Written and directed by Australian filmmaker Goren Stolveski, despite the supernatural foundations of You Won’t Be Alone, the film transcends any kind of orthodox concept of a generic framework and rises almost ethereally to become something uniquely and devastatingly its own. A beautiful love-letter to his Macedonian origins, that the film is made by Australian, spoken in Macedonian and is an international co-production speaks to the strong multiculturalism so embedded into contemporary Australian culture that is far too often rendered invisible in the pervasive national tendency to stick to tacky screen representations of bikini-clad, sun-drenched cliches.

Echoing similarly breathtaking Australian-made, European-set co-productions such as Ariel Kleiman’s near-indescribably divine Partisan with Vincent Cassel from 2015 and Steven Kastrissios’s similarly horror-adjacent Bloodlands from 2017 which was filmed in Albania, You Won’t Be Alone is not just one of the best films from an Australian filmmaker in recent years, it is an easy pick as one of the best films of the year thus far, full stop. Moving, startling, shocking, tender, brutal, thoughtful, sensitive…the film provokes almost too many descriptors, too many emotions, to allow it to be wholly captured in mere words. There’s a dizzying intensity to You Won’t Be Alone that is far too rare in cinema, a sensation that almost needs to be mourned once it starts wearing off. It’s easy to forget sometimes that film can be this good – if nothing else, You Won’t Be Alone is a powerful reminder of just what it is that cinema is uniquely capable of doing that no other art form can ever quite equal.