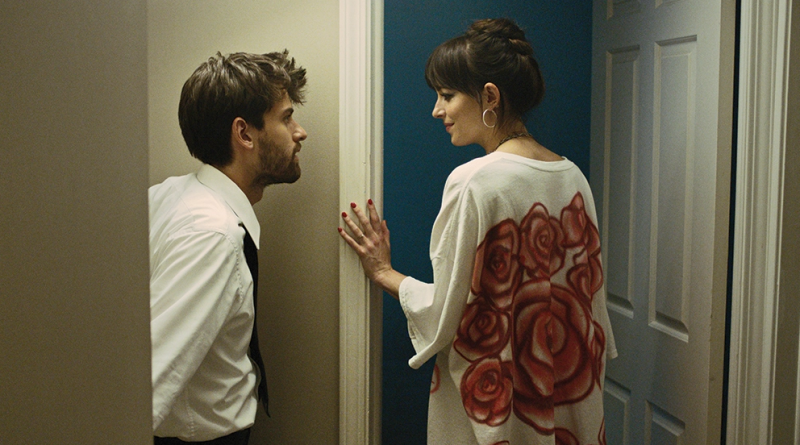 At first blush, I thought the coming-of-age drama Cha Cha Real Smooth sounded like one of those tiring “manic pixie dream girl” narratives, with an aimless college graduate curing his ennui through a friendship with a mother and her autistic daughter.

But filmmaker Cooper Raiff, who stars here as well as writes and directs, surprised me with something more subtle and nuanced. It’s not just the graduate who matures during this friendship. The mom does too, with a tender, complex performance from Dakota Johnson (The Lost Daughter).

Shown at the 2022 SXSW Film Festival (and coming to Apple TV+ soon after scoring a $15 million distribution deal at the 2022 Sundance Film Festival), Cha Cha Real Smooth is a delicate and endearing story that glides and twirls through its characters’ uncertainties in sweet and unexpected ways.

Andrew (Raiff) has a degree in marketing, a girlfriend in Barcelona on a Fulbright scholarship, a quick wit, and his heart on his sleeve. He falls into becoming a “party starter” for the local kids’ bar and bat mitzvahs after accompanying his younger brother, David (Evan Assante), to a classmate’s party. Seeing the dance floor painfully empty, the effortlessly charming Andrew gets everyone dancing—including Lola (Vanessa Burghardt), who is on the autism spectrum and a little taller and older than the other children.

Andrew swiftly impresses the parents, including Lola’s divorced mother, Domino (Johnson, one of the film’s co-producers). She asks him to babysit Lola, who likes that he doesn’t baby her. Meanwhile, he gets the party rolling at the other kids’ get-togethers, admiring this rite of passage even as he struggles with stepping into adulthood.

The film enjoys long takes and closeups, basking in the characters’ company and quiet moments. Andrew tends to Domino during an emergency, and the two flirt over freeze pops at the kitchen island. They share a couple of kisses, but the thirtysomething Domino isn’t toying with Andrew as much as sorting out her own feelings. It’s a tricky balance for Johnson, who shows this woman wistful over the life she might have had if she didn’t have a child so young but also wanting to do her life right. She’s drawn to Andrew’s openness and possibility even as she knows her fiancé, Joseph (Raúl Castillo, Army of the Dead), a traveling attorney, is the better choice.

Andrew can have a smart mouth, but he’s guileless and full of empathy, a quality the film extends to its core characters. From David to Joseph to Andrew’s mother (Leslie Mann, Motherless Brooklyn) and stepfather (Brad Garrett, TV’s Fargo), the film treats these people with respect and grace. Even Burghardt, who is on the autism spectrum and makes her film debut here, shows Lola forming a genuine and quirky bond with Andrew, who likes her pet hamster and asks what she needs.

In exploring the different loves in life and how we can have many soulmates, Cha Cha Real Smooth is a low-key delight. It captures the ambivalence of the postgraduate days, brims with emotion and sincerity, and shows the dance of teaching each other a thing or two.