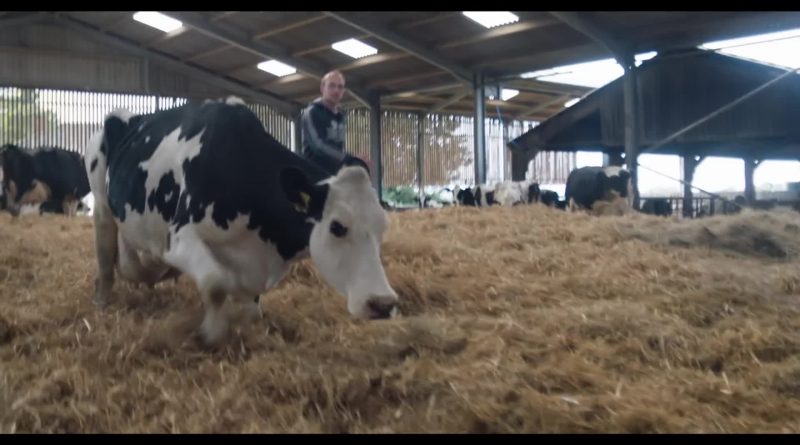 Maternal instinct makes Andrea Arnold’s first feature documentary doubly challenging to watch, and that is most certainly the point. Cow takes the audience on an intimate journey alongside a dairy cow named Luma. Be prepared for your view of the bovine to drastically change. Cow is a shocking film that might turn you into an animal rights advocate.

The up-close and personal handheld camerawork has a gritty feel. Cow shows us things we cannot unsee. Luma’s daily routine consists of milking, breeding, and getting shoved in any given direction. Our first encounter with the insemination process features a fireworks display in the distance, lending to a heightened creepiness. When her newborn calves get separated from her almost immediately, you can feel the desperation. The sadness is palpable in her body language. Luma does not fear the camera. She stares straight into the lens, her emotions clear as day, as she vigorously yells at cinematographer Magda Kowalczyk. Neither Kowalczyk nor Luma is afraid to get down and dirty.

The farmers play music for the cows while they’re hooked to the milking mechanism. At the beginning of the film Billie Eilish’s Lovely echoes in the barn. If you know anything about Billie and her mother, Maggie Baird, it is that they are diehard vegans. The irony hits hard. Cow adamantly reminds us that animal rights are valid and needed. It shines a bright light on the dairy industry and the cyclical inhumane treatment of these creatures. They serve a purpose, and their purpose is profit. On the other side of the coin are the farmers. In the film, their relationships with the animals are evident. It’s a tricky balancing act of emotions for the audience.

Growing up in a small Connecticut town, I worked in a farm store and now famous ice cream shop on a working dairy farm. I rarely thought about the animals, only that they smelled terribly awful in the summer months. Watching Cow has given me an entirely new perspective on the creatures and the owners, who I know work tirelessly. Up with the dawn, and inside well past sunset. It’s a complex issue for someone who uses heavy cream in my coffee every morning. Andrea Arnold gives us a lot to contemplate through the eyes of Luma. Your discomfort is warranted. I suspect every single viewer will feel the same way.