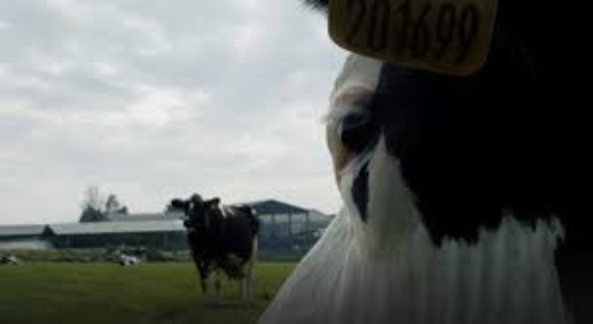 You will never look at a cow in the same way again.

Andrea Arnold’s bracing documentary may take time to pull some viewers into the Fred Wiseman-like immersion on an English cattle farm. But as cows are routinely milked, handled, herded into one pen after another, across mud-soaked floors and under buzzing bright lights, a rhythm sets in. The routine is the point. These are service animals; the unnamed humans who brusquely command them (“c’mon, girlie”) and corral them are just doing the day in, day out business of taking from them until there is nothing left to take.

The camera lingers on one cow in particular, stamped with the number 29 on her hind quarters but named Luma. In the mesmerizing opening scene, she’s giving birth but after being allowed to briefly nuzzle and lick her calf, they’re separated. The film follows both cycles — the calf is quickly weaned, brutally de-horned, and farmed out while Luma continues her life of servitude: a milking machine attached to her swollen udder, eating, mating with a bull, giving birth again, all done at various times of the day and night until it all blends together. Of course, we know how the life cycle ends and there is an impending sense of dread. When it comes, it’s a jarring moment that may leave the viewer stunned or in tears.

Comparisons with Russian filmmaker Viktor Kossakovsky’s pig documentary Gunda are inevitable. Cow is as meditative, but its lyricism comes from the stark visuals and sound design, the hypnotic rhythm, and the camera’s intimacy. We are so close to Luma’s lumbering body and unrelenting stare — at one point she looks directly into the lens and lets loose a plaintive wail.

Cow immerses the viewer into Luma’s world and even into her body. After she births a second calf toward the end of the film, a farmer’s distant voice notes that Luma’s protectiveness of the calves is something that “happens in old age.” We then take a lonely walk with her as she’s herded down a muddy road, her udder so enormous that she staggers and her back hoof slips on the wet surface. Cow takes this inevitable journey without sentiment, making it more haunting.