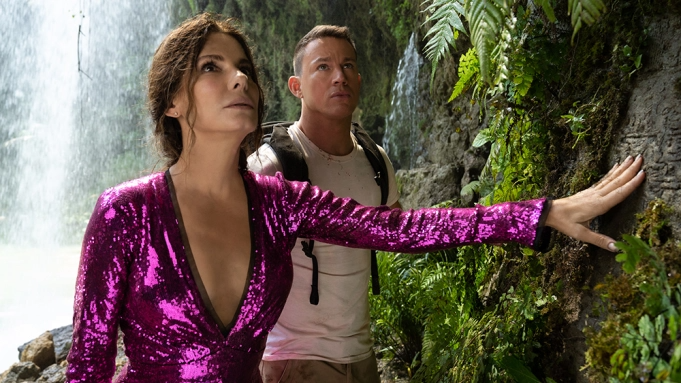 Let’s venture back into movie theaters this week with new 2022 releases – like The Lost City, starring Sandra Bullock, Channing Tatum and Daniel Radcliffe.

While on tour with Dash promoting her new archology-based book, Loretta, reluctantly clad in a fuchsia sequined jumpsuit, is abducted by ruthless Abigail Fairfax (Daniel Radcliffe). This egomaniacal British billionaire believes Loretta can interpret an ancient parchment with hieroglyphics leading to the fabled Crown of Fire, hidden on a remote volcanic island in the Atlantic Ocean..

Eager to be Loretta’s hero in real-life, goofy, guileless Dash is determined to rescue her, even if that means traversing a treacherous jungle. He teams up briefly with raffish Jack Trainer (uncredited Brad Pitt), who’s the embodiment of a far more capable mercenary. Their comedic banter is hilarious!

The formulaic script by Oren Uziel, Dana Fox and co-directors Adam and Aaron Nee – from Seth Gordon’s story – is remarkably reminiscent of Romancing the Stone with Kathleen Turner and Michael Douglas, Harrison Ford’s Raiders of the Lost Ark, even the first Mummy movie with Brendan Fraser and Rachel Weisz.

Problem is: You never feel that Loretta and Dash are in real peril. Instead, they’re two movie stars romping through an adventurous rom-com.

So how did they get Brad Pitt to do a cameo? Apparently, Bullock and Pitt share the same hairdresser, Janine Thompson. Years ago, Brad asked her if Sandra would do a cameo in Bullet Train (2022) so this how he returned the favor.

Filmed in the Dominican Republic, this film is scheduled to debut on the Paramount Plus streaming service about 45 days after its original release.

On the Granger Gauge of 1 to 10, The Lost City is a high-stakes, escapist 7 – with revelatory post-credits scenes.