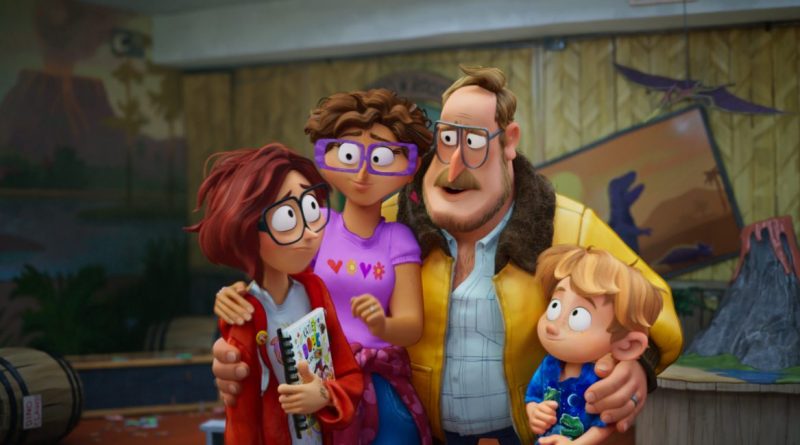 A fictional teenage film student may be this Awards season’s best campaigner as the mediocre The Mitchells vs. the Machines dazzled the animation BAFTAs, Critics Choice and Oscars – and many wonder why.

17-year-old Katie Mitchell (voiced by Abbi Jacobson) is an avid film student, heading to college in Southern California, when her overbearing father Rick (Danny McBride) cancels her plane ticket and decides to take Katie, her dinosaur-obsessed younger brother Aaron (voiced by director Mike Rianda), and her mother Linda (voiced by Maya Rudolph) on a road trip in their ’93 stick-shift station-wagon.

For years, geeky Katie, who continually spews out movie references, has been churning out videos for her YouTube channel, including “Dog Cop,” featuring the family’s bug-eyed pug, Monchi.

“Who would have dreamed the tech companies wouldn’t have our best interests are heart?” murmurs perpetually upbeat Linda.

The evil computer PAL is referred to as “my Queen” by some of the robots, perhaps a reference to voice actor Olivia Colman, who played Queen Elizabeth II in The Crown, and the Mall of the Globe in Colorado is a dig at the Mall of America in Bloomington, Minnesota.

Katie’s catapult to fame is attributed to writer/director Mike Rianda, co-writer/director Jeff Rowe and producers Phil Lord and Chris Miller (Cloudy With a Chance of Meatballs, Spider-Man: Into the Spider-Verse) who have shamelessly plunged into massive marketing, sending decorated cupcakes and replicas the the wooden moose to voters and plastering billboards around Los Angeles, promoting Katie’s website.

FYI: Linda’s recipe for ‘face’ cupcakes is shown during the final credits.

On the Granger Gauge of 1 to 10, The Mitchells vs the Machines is a frenetic, fast-paced 5, streaming on Netflix.