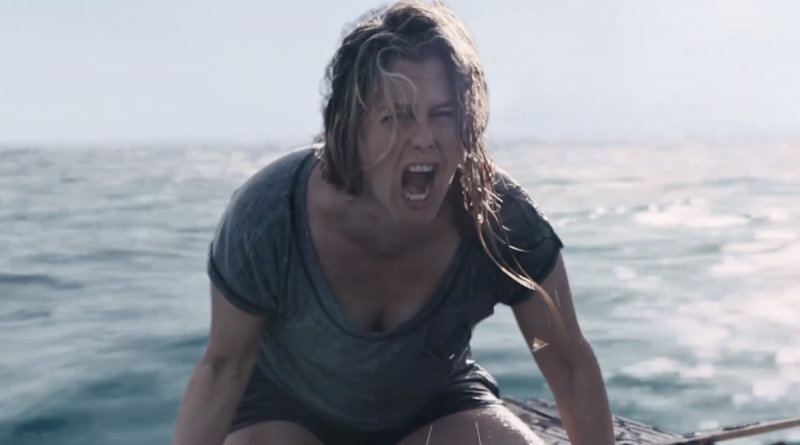 Occasionally – thankfully, not often – survival stories are so lame and ridiculous that one wonders why and how they were ever green-lit for financing and production. The Requin is one of those.

The saga begins as Jaelyn (Alicia Silverstone) and Kyle (James Tupper) arrive for a much needed getaway at a luxurious tropical resort in Vietnam, even if it is ‘off-season.’

Whining Jaelyn is still suffering PTSD from a recent trauma in which she lost their newborn during a home-birthing attempt gone wrong. “The baby didn’t have a heartbeat,” Kyle reminds her, “so she didn’t have a chance.”

Hoping to assuage Jaelyn’s feelings of guilt, Kyle paid extra to secure an overwater bungalow with stunning panoramic views. Yet when they decide to take a quick swim, Kyle cuts his leg on some coral.

Nevertheless, as they settle into their quarters, a horrific monsoon develops. While wind batters the walls, their floating villa becomes separated from the flimsy wooden bridge connecting it to the beach and drifts off into the sea.

So they’re totally stranded. Jaelyn is frantic since Kyle’s bloody leg is now badly infected, eventually attracting ravenous sharks. Before the sharks appear, however, there’s a jump scare involving a school of fish and another involving a dolphin.

Although Vietnamese-American writer/director Le-Van Keit (Furie) works with cinematographer Matt S. Bell to utilize every scenic advantage of their supposedly exotic location, the result – filmed mostly at Orlando Studios in Florida – is disappointingly formulaic, and the cheesy shark CGI reeks of carnivorous cost-cutting.

FYI: ‘Requin’ describes tropical sea sharks, characterized by a nictitating membrane (transparent third eyelid) and a tail fin in which the upper lobe is larger than the lower.

On the Granger Gauge of 1 to 10, The Requin is a tediously paced, disappointing 2 – relegated to Redbox kiosks and streaming on Vudu, Prime Video and Apple TV