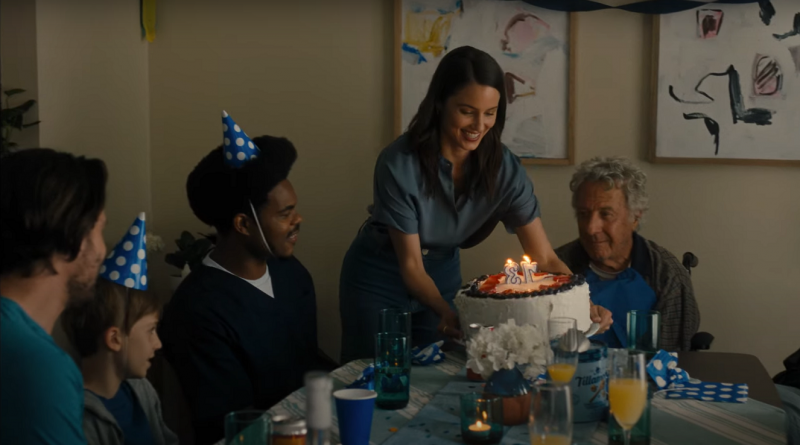 As They Made Us is an emotionally resonating and deeply piercing film about learning to forgive, accepting that your parents are flawed human beings just as anyone else, and becoming more strengthened and wiser as you make your way in life, a finite journey for us all.

Director Mayim Bialik’s intimate dramedy is a filmed snapshot of a dysfunctional family’s journey at the end of life. The story centers on a dutiful daughter Abigail (Dianna Agron), and a dying father, Eugene (Dustin Hoffman), a connected tribe of two. Now, Abigail is a divorced mother who must manage the actors in her family play as they all come to grips with processing the slow death of a complex man who was loved and hated.

To reconcile past hurts takes a lot from anyone. As you mature and realize that mental illness does not announce that it is mental illness, as a child, you experience the behaviors and internalize and store the feelings deep until they are unpacked as you grow up. This hurt is now—knowingly or not—part of your psychological makeup and stays with you until perhaps you learn the whys of a person’s actions later in life and therapeutically go through the “forgive and let go” process.

The Frays are modern Jews. Mom and dad came of age in the 1960s and abused (or self-medicated) drugs and alcohol. And now, ironically, Abigail writes for The Modern Jew magazine, a source of pride and berating from mother acid-tongued Barbara (Candice Bergen), for which nothing is ever enough. Nathan (Simon Helberg) is a professor with a life purposely compartmentalized away from his family.

Barbara is two steps forward, three steps back kind of mother. She reminds Abigail she has yet to score a cover feature. The bookends of responsibility and duty hold love and hate together, seasoned to perfection with simmering resentments. Both Agron and Bergen are dynamite in their respective roles, Agron deeply subtle and reined, while Bergen’s unfettered excesses as Barbara are masterfully delivered. Helberg’s rendition of Nathan is a heartbreaker. He wars with his complicated feelings towards his father, who he feels less animosity than towards Barbara, his mother, whom he cannot forgive. Hoffman’s performance of Eugene in the last months of his life is gut-wrenching and realistic, his mind blessedly skipping over the bad chapters of his life, recalling the good times as his body begins to fail.

Older brother Nathan fled the scene early on, the runner of the family who raised bridges and ripped his clothing in grief metaphorically years ago. Now, father Eugene’s impending death is the axis of how these three survivors of an unorthodox family must deal with his exit and the aftermath of a lifetime of tsuris (woe and frustration) as they reconnect and forge a new family dynamic, reconciling that not having an ideal childhood and surviving physical and emotional abuse will make their own lives stronger.

To be Abigail is to allow love to supersede the actions of others, actions that poisoned Nathan’s spiritual well. She is a mother, has a healthy and kind relationship with her ex-husband. She helps her mother, tends to her father, and tries to balance all these moving parts while running her household and paying the bills.

Eugene’s rapid decline and process of dying is a lesson that shows us all will experience this natural order in their own lives. Some of us experience the death of a child or parent, and it is a sudden shock of an event, a battery on the soul that feels physical in the immediacy of the death. The slow goodbye is a different experience. The grief is a steady build as death gets closer, with us watching and tending a loved one whose decline to the end of life is a checklist of events, not eating, sleeping more, trouble breathing, and on. As in Eugene’s case, it is not as physically assaultive as the sudden death but wreaks its unspooling havoc as memories and moments pop up at the most unexpected times.

Bialik slowly pulls us into Eugene and Barbara’s marital orbit as we see their parenting skills are not normal. The children, Nathan and Abigail, bear the brunt of their undiagnosed mental illnesses. Dad is mercurial and explosive in his anger. Mom is relentless in her codependence and manipulative favoritism, and her judgmental worldview. Nathan is angry at Abigail for not seeing these things as clearly as he did, and Abigail is mad at Nathan for never seeing the good in the few moments they had. Nathan Fray summed it up in a poignant exchange with his sister about why he left. “His wreckage was tangible; hers was so insidious and disturbing.”

Abigail’s yoke of the fixer, the caregiver, and the mediator comes with a weight, and of course, Abigail will break at a point for doing all the heavy lifting in Eugene’s passing.

The film realistically shows how degenerative neurologic illnesses and geriatric frailty leads to a transitory place where the dying refuse food and water, and the death process begins. It’s not easy to watch or go through it. But, no one escapes it, and Bialik’s film underscores that time will heal, that having an adult understanding of the hurts we bury deep in our psyche is not our fault. And that letting go and forgetting past injuries to the heart and soul sometimes can be the best medicine anyone will take.