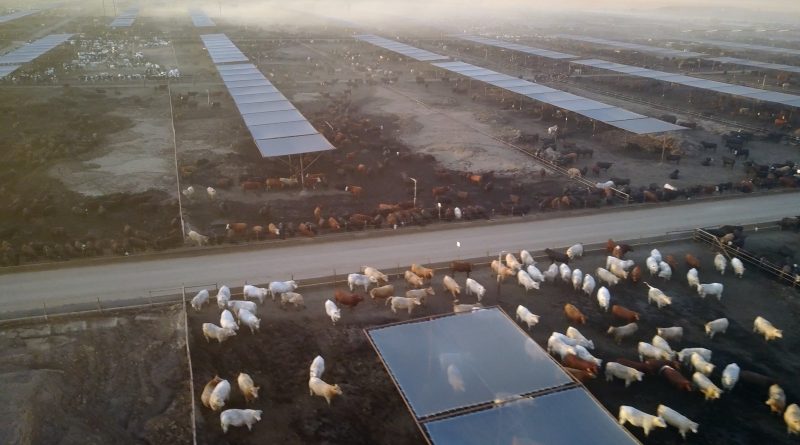 The average person shopping for groceries doesn’t give a lot of thought to where our food comes from—but we should, notes the documentary Meat the Future. As one scientist says, feeding everyone in San Francisco a burger each week would take about 240,000 pounds of meat, roughly the size of a blue whale.

Conventional agriculture can’t keep pace with human hunger, it seems, with forecasts predicting our demand for meat will double by 2050. Meat the Future is as much a teaser to this problem as it is an introduction to a possible solution: lab-grown meat.

Known as clean meat or cultivated meat, this isn’t a meat substitute, cloned meat, mystery meat, or “Frankenfood,” as one person says. Rather, it’s groundbreaking science that produces real beef, chicken, or pork from the original animals without killing them. As the pioneering company Memphis Meats explains, the science focuses on cell division instead of the reproductive process.

Director Liz Marshall (The Ghosts in Our Machine) uses minimal narration from noted environmentalist and UN Messenger of Peace Jane Goodall to outline the planet’s food problem and this seemingly sci-fi solution. Meat the Future spends a good portion of its brisk running time explaining that this is, in fact, real meat with the same texture and taste, complete with closeups of dishes right out of a gourmet cooking show.

The film also acknowledges that the concept is quite a hurdle, a “real mind-blower,” says one interviewer.

Fortunately, the film has as its compass Dr. Uma Valeti, a Mayo Clinic cardiologist turned co-founder of Memphis Meats. Valeti is relatable and genuine, describing how, as a child in India, he saw chickens slaughtered for a birthday party and gave up eating meat. Later, as a physician injecting stem cells into patients’ hearts to regrow tissue, he wondered if the same technology could “grow” food, affecting billions of human and animal lives.

Valeti’s project by 2017 wins over investors such as billionaires Bill Gates and Richard Branson, global agriculture company Cargill Inc., and Tyson Foods. The concept bumps heads with the US Cattlemen’s Association, which cites consumer rights and food safety as reasons it doesn’t want this cultured meat considered equal to the straight-from-the-farm stuff. Yet at least one cattle producer extends an olive branch to learn more about the process, and the USDA and FDA agree to tackle regulation.

Meat the Future focuses so much on Memphis Meats (and what to call its products) that viewers might be surprised later in the film to hear from similar companies, such as Finless Foods, which produces “cell-based bluefin tuna” without mercury and antibiotics. It also doesn’t delve into the broader issues surrounding conventional agriculture. Headlines from news coverage highlight concerns about animal treatment and the effects of methane from such large farms on our climate. Brief drone shots of cow, pig, and chicken farms show their vast size, along with closeups of animals herded together; but viewers seeking a more intimate look at agriculture might check out Andrea Arnold’s Cow.

That said, Meat the Future comfortably takes on just what it can handle. Recognizing the challenge of this concept for consumers, the film includes voices from the nonprofit Good Food Institute and authors discussing the need for such foods. As one says, we might want to grow our own vegetables, but backyard gardens can’t meet the scale of this problem.

Memphis Meats, rebranded as Upside Foods, hasn’t yet brought its products to market, so the film doesn’t have reactions from everyday shoppers. But the film features scientists who find beauty in their work, such as one who likens the twinkling muscle fibers of chicken cells trying to align under a microscope to Van Gogh’s Starry Night. Music by musician and animal-rights activist Moby, an executive producer, papers over transitions of lab work, food tastings, and office scenes, observing, “We are all made of stars.”

While it’s not a full-course meal, Meat the Future offers intriguing food for thought.