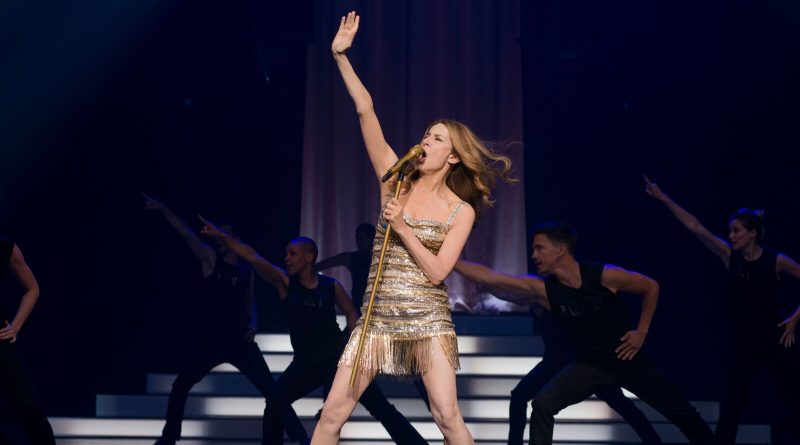 Co-written and directed by French actress (and comic) Valérie Lemercier — who also stars here — Aline is a kind of camp masterpiece, an over-the-top celebration of both the personal and the professional.

This, as the movie makes clear, is the story of Aline Dieu, not Celine Dion, even if all the facts line up.

Our fictitious biopic begins in 1932 with the meeting of Aline’s parents in rural Quebec. Her father discloses on their wedding night that he doesn’t want children. A cavalcade of babies later, the 14th and final Dieu baby arrives and is called Aline.

The child can sing. Everybody in the Dieu family sings and makes music, illustrated here in scenes that make them out to be somewhere between the Plouffes and the Von Trapp singers.

What follows is mad success. And mad love.

Aline is all about love and career, in this case completely intertwined stories.

Guy-Claude is stunned by Aline’s talent. Her gift is acknowledged. She starts appearing on TV, recording, and travelling the world to perform, accompanied always by her mother (Danielle Fichaud), of course.

But the adolescent Aline has obviously fallen in love with Guy-Claude, who guides her every career move. He is 26 years her senior.

She clutches his picture at bedtime; for thrills, she calls him at home and hangs up when she hears his voice. Puppy love.

Like the women in so many love stories, Aline gets an important haircut to signal her change from girl to woman — and she shakes out that new ’do in slow motion, of course.

The movie winks at pop culture, at Quebec, at the era — visually, there’s an exuberance about Aline that is daffy, self-deprecating and unfailingly delightful.

The age-gap footsie continues between Aline and Guy-Claude until she is 19 or 20. At 20, she wins the 1988 Eurovision competition and is launched into the celebrity stratosphere.

Aline is old enough now that she and Guy-Claude they can finally be a couple, and eventually they get married.

Her wedding, her subsequent fertility struggle, her blissful embrace of motherhood and her ever-growing success — Aline has all the details Celine Dion fans know well.

The film manages to cover an enormous amount of ground without ever losing energy or a viewer’s interest, and it soars between comedy and domestic drama with ease.

(Also on the soaring front: Victoria Sio is the person doing the singing here, belting out songs with Celine-like fervor each time Aline takes the stage and opens her mouth.)

The last act of the film concerns Aline’s life after the death of her beloved Guy-Claude, and it is unexpectedly moving. She is so vulnerable.

You don’t need to know anything about Celine Dion to enjoy the movie, and you might even become a fan of Dion’s in the process.

What star/filmmaker Valérie Lemercier manages to do here is tell a great yarn and put a human face on the singing icon while she’s at it.

And speaking of that human face, much has been made of the fact that Lemercier plays Aline at every age, including childhood, a feat she managed with special effects and by digitally shrinking herself.

That adult face on a child has been called out as way too weird; for this viewer, it was just more of the bizarre and wonderful, elements the film has in abundance. In a way it suggests that Aline was always Aline, born fully armed and ready to spring into adult life. It’s a standard goddess thing.