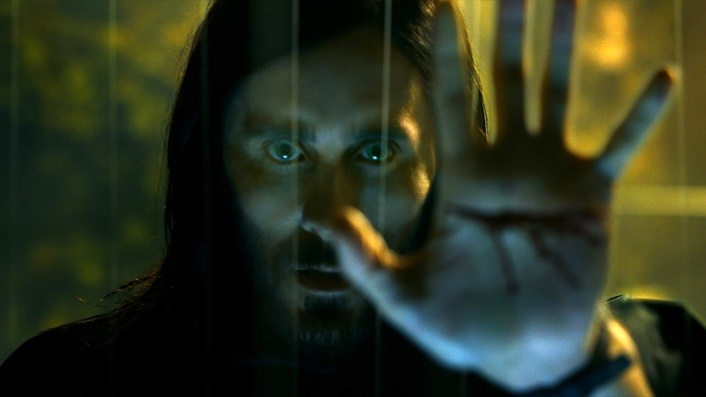 Just how bad is the Marvel origin story of Dr. Michael Morbius, the conflicted scientist with a rare blood disorder who mixes his plasma with that of vampire bats? Pretty bad…

Michael (Jared Leto) and his best friend Milo (Matt Smith) share this mysterious illness which has left them debilitated, forced to walk with canes. Determined to find a cure, Mobius takes off for Cerro de la Muerte in the misty mountains of Costa Rica, where thousands of vampire bats dwell.

There’s a flashback to Greece – 25 years earlier – recalling frail, young Michael (Charlie Shotwell) in a children’s clinic under the care of sympathetic Dr. Nicholas (Jared Harris). That’s where Michael meets a wealthy British lad, Lucien (Joseph Esson), who suffers from the same malady. Nicknaming his new friend Milo, Michael compares them to the Spartans: “We are the few against the many.”

Cut back to Morbius’ New York-based Horizon laboratory, where he stuns his colleague, Dr. Martine Bancroft (Adria Arjona), by turning down the Nobel Prize for his development of artificial blood because he feels that’s just the beginning of his life’s work.

Instead, Michael uses a centrifuge to combine his DNA with that of Costa Rican vampire bats. Since this kind of experimentation is unethical and illegal, he takes Martine with him on a cargo ship that sails off the Eastern Seaboard.

Once they’re in international waters, Martine injects his concocted serum into Michael’s spine. Suddenly, he grows fangs and razor nails as his body contorts, becoming bat-like, and he’s ravenous for the taste of human blood.

Milo then wants in on the violent vampire carnage. In their final battle, Milo insists their new condition is not a curse but a gift – just what the Green Goblin said in “Spider-Man: No Way Home” (2021).

Flimsily scripted by Matt Sazama and Burk Sharpless, the formulaic saga is directed by Daniel Espinosa, who stages overly shadowy action sequences. Plus, there are two post-credits ‘teaser’ scenes.

On the Granger Movie Gauge of 1 to 10, Morbius is a miserable 5. Ghoulish gothic gloom.