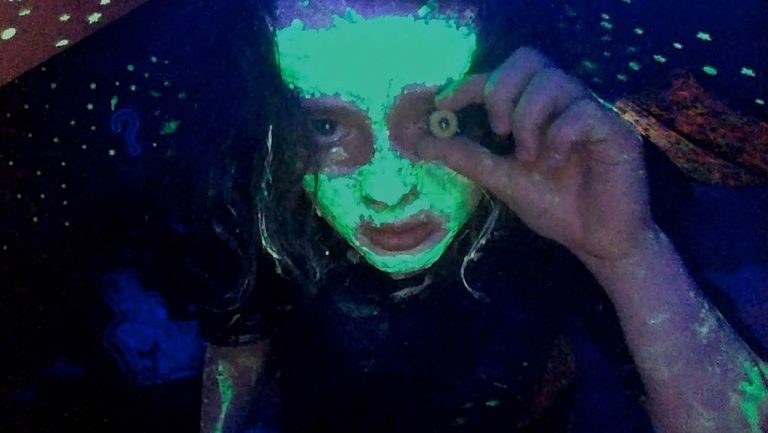 Casey is a siphon for teenage angst. Anna Cobb fills her sketchily written character will a full range of emotions that makes her performance utterly galvanizing. She is a persona caught in the contradiction of working on establishing her identity while, at the same time, trying to obliterate herself. Every moment of Cobb’s wide-eyed and searching performance is believable and affecting.

Daniel Patrick Carbone’s camera work and Schoenbrun’s editing are enormously skillful, creative and effectively eerie. They actually disorient the audience by sometimes creating the impression that you, the viewer, are online with Casey, joining her as the recipient of her Internet video  presentations and viewer challenges, rather than watching her Internet presentations from ‘the balcony’ or your couch. The psychedelic lighting is appropriately trippy.

With all of its dissociative elements, the film is actually more meditative than shocking. It’s billed as horror, but there is no horror cringe, no slasher gore. Instead, the film provides a curiously contemplative — if somewhat extreme — fictional look at what it might be like to be a contemporary teenager facing all of the hard issues and questions raised while coming of age in a world-wide civilization that is particularly unsure about its future.

We’re All Going to the World’s Fair is not an easy watch. But, WOW, it is unique and it is effective. And, no spoilers, but the film’s ending lands with a twist that isn’t foreshadowed, but comes as no surprise and effectively grounds the fantasy of the film in one sad and daunting reality of of kids’ Internet experiences.