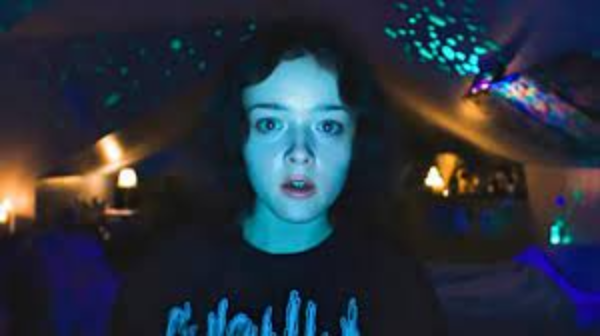 The Blair Witch Project meets Eighth Grade as writer, director, and editor Jane Schoenbrun’s We’re All Going to the World’s Fair is a sensitive though semi-creepy exploration of internet culture wrapped up in a coming-of-age tale that focuses on adolescent Casey (fab newcomer Anna Cobb), a shy girl in the boondocks who decides to take on the film’s titular on-line challenge in the middle of the night. When we first meet our young protagonist, she is alone save for her favorite stuffed monkey toy from her childhood during an eight-minute webcam shot as she faces her laptop screen on her desk amid her neon-lit attic bedroom.

It turns out that she is about to try about to attempt what is known as “the internet’s scariest horror game.” To engage with others, Casey must first say, “I want to go to the World’s Fair” three times, pricks her finger while showing the blood to her audience, whoever they may be, and strikes up an extended video of strobing lights and pulsating sound to watch. That, she tells us, is the challenge, but she’ll update us if she “starts to notice any changes.”

She then focuses on other “World’s Fair” players’ reactions, with one person claiming to be turning into plastic and another showing an image of hands emerging from the laptop screen and pulling him in. But while Casey’s videos are little viewed, she is befriended by a supposed fellow player who is identifies himself with the initials JLB. He connects with her while sending an all-caps message: “YOU ARE IN TROUBLE. I NEED TO TALK TO YOU.”

We then get to see the thin middle-aged bald man (Canadian horror icon Michael J. Rogers), who is reaching out to her with the message while ensconced in his extravagant homestead, lavishly filled with high-end décor. He attempts to cozy up to Casey as he endears himself by praising her diary-like videos and while connecting to her own social isolation. As for her parents, we only get to hear her dad yell at her for being up so late at night. Otherwise, we never get to see them in the flesh. Nor do we see her attending school or even doing homework.

Given that she seems to have no close friends, Casey is an easy target for such an individual who basically wants to groom her from afar. But by the end of the film, she takes a small step forward in her life by embracing a more mature existence. There are some gimmicks about, including a sound design that resourcefully incorporates ASMR – aka – autonomous sensory meridian response techniques — that often lead to a “ticklish brain massage” — while evoking our heroine’s headspace. Casey eventually covers her face with garish glow-in-the-dark green paint and destroys her fave toy that she has own since she was 5. These actions, however, help her reconnect with reality and step out of the on-line danger zone while taking steps toward a new maturity. As for the movie, it relies on webcam perspective and smartphone shooting in many clever ways.