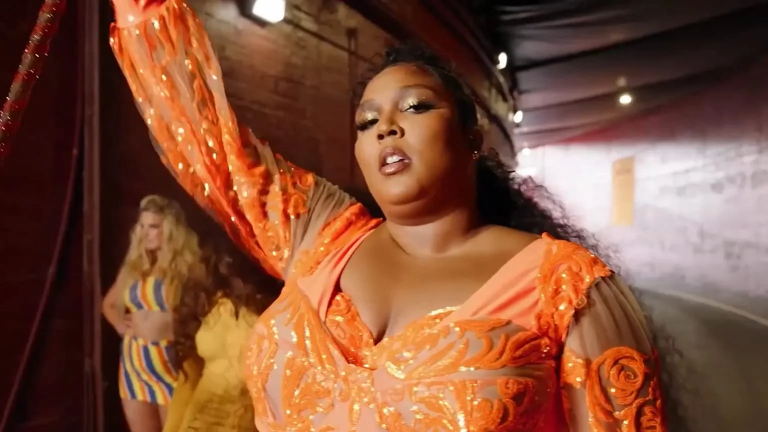 There’s a new reality tv show on Prime Video that not only gives voice and representation to an oft-neglected segment of women in our society, but is also likely to appeal to the reality tv-averse crowd. It’s Lizzo’s Watch Out for the Big Grrls, in which 13 large women have been selected out of thousands for a chance to become background dancers for the performer, at Bonnaroo and on tour. Through 8 episodes, Lizzo and her team put these women, all but one of whom are women of color, through their paces, with rigorous dance rehearsals and special sessions with teachers and guests who work to bring out the best in them. There’s no room for cattiness, negativity, or cliquishness. Lizzo’s after building a supportive sisterhood of women who raise each other and themselves up. Though the affirmations and the many moments of tearful introspection might be too much for binge-watching, anyone looking for unapologetic positivity will benefit from watching these episodes whenever a heaping helping of “Hell Yes” is needed.

Here, representation is front and center. This show doesn’t just highlight big women. Many of them are Black. All the episodes are directed by women, and Lizzo’s musicians are women. Her choreographer and musical director is a Black woman, and all but one of the educators brought in to inspire the potential dancers are Black women as well. We also never hear any of the hopefuls talk about their boyfriends. As I remember it, the only men featured or discussed in the show are Lizzo’s stylist and dancer Asia’s father, whom she reveals was gunned down by police when she was only 5 years old. How often is there a show in which men aren’t playing a part, especially when it’s partially about embracing your own sexuality? None that I can think of, and whether it goes unnoticed or not to audiences of this show, it’s a rarity, and it’s a delight.

Lizzo’s Watch Out for the Big Grrls is unusual in a landscape overrun with reality shows in that there’s not a weekly elimination, or a catchy structure in which the grrls are at risk or safe from episode to episode. All 13 can be admitted to her team, or go home There are no rules. These women are not in competition against each other, they are competing with themselves to become better, stronger, and more of what Lizzo affectionately calls “100% that bitch”. One narcissist repeatedly makes the group as a whole uncomfortable, bulldozes, and calls attention to herself. When Lizzo finds out, she’s shown the door. One dancer seems off at rehearsal, missing a lot of steps and making several blunders including walking in front of the headliner. Lizzo doesn’t berate, she educates. Is that all for show? Some of the comments offered directly to the camera might be performative, but she seems to genuinely open her heart to these women. More than anything, she wants them to find the radical self-acceptance she has found for herself. She wants their dreams to come true, just as hers have, and she rightly believes being fat shouldn’t keep anyone from feeling, as her song says, “good as hell”.

In fact, on a list of the many beautiful things about Watch Out for the Big Grrls, by far the best and brightest element is the genuine enthusiasm and support Lizzo shows for her potential back-up dancers. I’m trying to imagine a number of other multi-platinum diva performers giving this level of concern for women working in the background, and, though no doubt they’re out there, I’m hard pressed to list them. Lizzo shows that support, by the way, in a revolving collection of gorgeous costumes and hair styles that will make your eyes pop, and get you excited to see what she’ll wear next.

No doubt this will drag out scores of folks who rail against the idea of, to quote one Prime member who couldn’t keep their mouth shut, “mainstreaming the idea that morbid obesity is a good thing”. To that I say there are many women in the world who are fat, and no amount of exercise or dieting will change that, as exampled by the 12-14 hour a day physically demanding rehearsals Lizzo’s Big Grrls put themselves through to perfect their dance sequences. They exist. Do we hide them, pretend they don’t exist, and demean them into eating disorders? There should be something for every color, shape, and size of human reflected onscreen. They are no less deserving of celebration than the emaciated models and actors kids see and try to emulate, often to the detriment of their self esteem and mental health.

In a way, the name Watch Out for the Big Grrls says it all. It taps into the subconscious bias of a huge part of the population who believe fat women are to be avoided or erased. It’s also a call to sisterhood, whether thick or skinny, in which all of us as women look out for each other. It’s a tall order for such a fat-phobic society. For Lizzo, it is either a call for empathy and acceptance or a demand, whichever allows for big girls to shine and get their due.