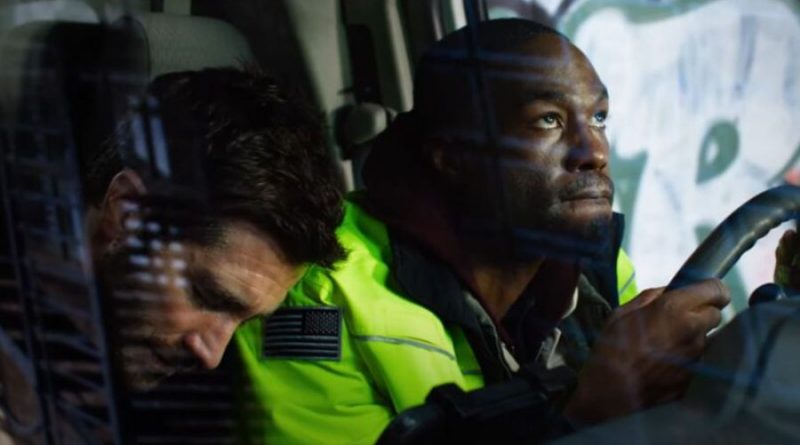 Ambulance is a Michael Bay boilerplate thrill ride throwback to the 1990s that desperately hopes its audience will hang on for the wildly absurd ride.

Simultaneously loose on plot and overstuffed with storylines, Ambulance is set during one long day in Los Angeles. Playing out in near real-time, viewers meet Will Sharp (Yahya Abdul-Mateen II), a Marine veteran with bills piling up, an infant son, and a wife in desperate need of experimental surgery insurance won’t pay for. In an act of desperation, Will reaches out to his adoptive criminal brother Danny Sharp (Jake Gyllenhaal) who, conveniently, has one massive bank heist set up for that afternoon that will net $32 million. All Danny needs is one more body for this simple bank job.

One look at the bumbling crew and we already know this is one heist that won’t go to plan. When things quickly go awry, the brothers bully their way onto an ambulance as an EMT (Eiza Gonzalez) desperately tries to keep the rookie cop (Jackson White) they shot alive. With the cop as the Sharp brothers’ ticket to survival, they embark on a wild ride through Los Angeles with the law in hot pursuit.

An LAPD police captain (Garret Dillahunt) and an FBI agent (Keir O’Donnell) lead a team bent on getting their rookie out of harm’s way while a Mexican crime lord (A Martinez) stands ready to lend a helping hand to the Sharps if it means a big payout, the careening ambulance must navigate more than just the impending threat of rush hour gridlock.

Based on a 2005 Danish film of the same name, Bay’s latest entry into to his explosive filmography is a near two-hour chase scene overstuffed with some quippy one-liners that feel resurrected from the director’s mid-90s action blockbusters The Rock and Bad Boys. Viewers needn’t worry if they forgot about those movies because Chris Fedak’s script will literally remind you they exist with characters referencing and quoting from each of them.

In Ambulance, Bay attempts to prove a theory that more is more. More overheard viz of an ambulance speeding through the streets! More drone shots! More angles! More explosions! There is almost something quaint about the finished film and the way it approaches its action scenes as if it was 1996.

Bay, who has always been known as a director who likes to shoot first and assemble the story together l in the editing room later, has a style that he sticks to. But it feels as though he is just going through the motions here, hoping audiences will turn off their brains and just enjoy stuff exploding and high speed chases they’ve loved in his previous films. With Ambulance, there is never any doubt that you are watching a Michael Bay film and as such, the director delivers what is to be expected from him.

Whether it is a result of Bay’s assembled editing style, the result is Gyllenhaal’s Danny is wildly uneven. Gyllenhaal has proven he can do sociopathic in Nightcrawler, but here, we never figure out if he’s an actual villain or simply one brother pushed too far. The Sharp brothers seem to like each other, but their brotherly bond doesn’t seem to exist beyond some reminiscing about their criminal dad. Abdul-Mateen II is the obvious one to root for as the brother who is trying to do the right thing, but the actor seems overwhelmed at the ludicrous plotlines and dialogue being shouted at him as he’s behind-the-wheel.

On the opposite end of the spectrum from Gyllenhaal is Gonzalez’s coolly detached paramedic, who, in one of the most absurd scenes in the movie, operates on the rookie cop with the help of surgeons on a Zoom call as the ambulance speeds through LA streets. It is scenes like this that will make audiences think about how plausible the events of Speed really were in comparison.

Most frustratingly for audiences, there is a good story somewhere in here. Perhaps the strongest elements can be found in the original Danish version which clocks in at almost an hour less than Bay’s bloated version. Corny, cheesy, and wholly absurd, the best viewers of Ambulance can do is hold on and try to make it through Bay’s ride.