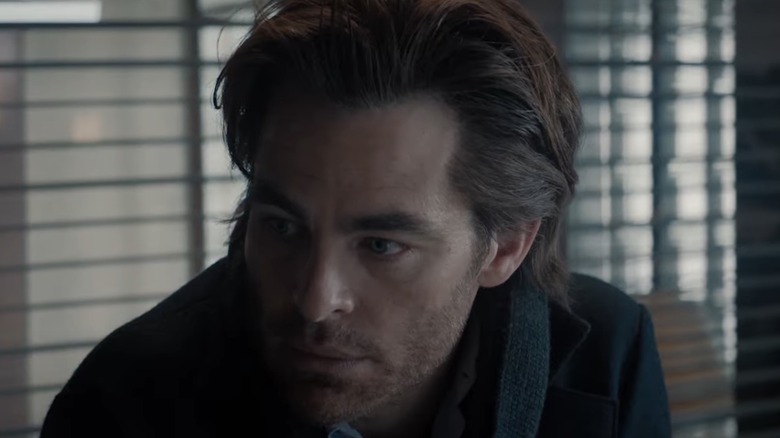 All the Old Knives relies on traditional cloak-and-dagger intrigue.

The setup for All the Old Knives works well. After Chechen terrorist Ilyas Shushani’s capture, he reveals that a CIA mole in their Vienna station contributed to the death of one hundred passengers, crew, and hijackers eight years earlier. This alarming news prompts Chief Victor Wallinger (Laurence Fishburne) to reopen this Flight 127 case.

Case officer Henry Pelham (Chris Pine) is designated to lead the delicate investigation, with a plot increasingly intertwining Henry and agent Celia Harrison (Thandiwe Newton) in a working relationship that spills over into romantic involvement. Unfortunately, personal complications between them overwhelm professional responsibilities as the investigation reveals. More interesting would have been pursuing the part played by Henry and Celia’s superior Bill Compton (Jonathan Pryce) and Chief Wallinger, among other CIA workers. Pryce, Fishburne, and several others recede into the murky background.

Adapted by Olen Steinhauer from his novel, director Janus Metz (who directed Borg vs. McEnroe) does keep momentum start to finish, thanks in part to the sometimes intrusive music. To his credit, he foregrounds the ethical issues in such high-stakes intrigue, asking when or if ever an informant must be sacrificed for a greater good. It is often too easy, as the machinations of the plot unfold, to forget that real people’s lives hang in the balance.

As in her work for The Girl on the Train, Fences, The Hunt, and A Quiet Placehttps://awfj.org/blog/2018/04/20/a-quiet-place-review-by-diane-carson/, director of photography Charlotte Bruus Christensen creates revealing compositions. The look and feel of the busy, slightly claustrophobic Vienna CIA office contrasts with the all-but-empty posh Carmel seaside restaurant interrogation dominated by only Henry and Celia in shot/reverse shot exchanges that rely heavily on emotional reactions. Similarly, Christiensen lights the seamlessly integrated flashbacks to London, Vienna, and the interior of Flight 127 to define quite different spaces, thereby keeping the emotional registers of each clear.

All the Old Knives relies too much on the on again-off again chemistry between Pine and Newton, but for those of us who embrace the cloak-and-dagger genre, it’s a worthy entry.