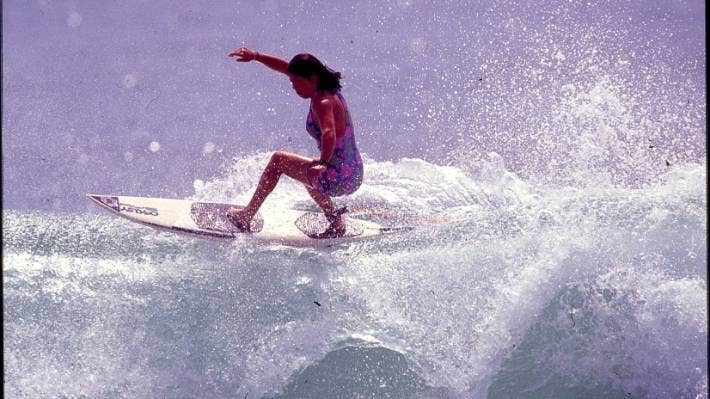 How the battle for equal treatment unfolded on the waves is the subject matter of Girls Can’t Surf, an energetic examination of women’s struggle to find equality in a male-dominated sport.

The charismatic women pioneers of the surfing world are the reason to see this dynamic documentary. Featured are those who broke the surf ceiling and made sure contemporary female surfers were seen as athletes and not sideshow entertainment.

Co-written by Christopher Nelius and Julie-Anne De Ruvo and directed by Nelius, Girls Can’t Surf is a cultural document that spans about 50 years and shows how women surfers fought for their place beside the men.

It also shows the remarkable attitudes of an era when women were regarded in many ways as second-class citizens.

Girls Can’t Surf hops around a lot among people, places and dates, but when the camera is on some of these early surf goddesses — Jolene and Jorja Smith, twin surfers from San Clemente, fellow Americans Frieda Zamba and Lisa Andersen, Australians Pam Burridge, Pauline Menczer, Jodie Cooper and Layne Beachley and South African Wendy Botha — the film is magic.

By the 1980s, women’s surf events existed, but they always took second place to the men’s events in money, billing and even surf conditions.

“When the surf was shit, they let the women go out. It was one-foot onshore rubbish,” says the outspoken Wendy Botha; women’s prizes were half what men won, and in tough times — like the 1991 recession — the solution that came up most often was to drop the women’s events to protect the men’s prize money.

Besides athleticism and drive, many of the women in Girls Can’t Surf seem to have a particular determination that set them apart before they picked up a surfboard. Many were loners, knowing no other women surfers coming up. For several of them, surfing appears to have been a form of salvation, a way to escape various health issues, poverty, lousy home lives. Some of the women are lesbians, something that had to be hidden in the era when they started; “The 80s were hard if you were gay,” says Jodie Cooper in the film, explaining how she lost a sponsorship when people found out her orientation.

Then there’s the money. Layne Beachley, considered one of the greatest women surfers of all time, talks to the camera about how she wasn’t really ever paid until she became world champion.

Despite their gains, women watched their events and prize money take another nosedive at the end of the 1990s.

Corporate sponsorships finally began to show up, and though the women made buckets of money for apparel companies and others who rode their coattails, very little of that money found its way back to them.

It wasn’t until 2019 that women finally got equal prize money to men.

Most of the film’s women, now long past their glory days, confess that they wept when they heard the news. Pauline Menczer, currently a school bus driver, says, “We never made a lot of money but we did what we loved.”

There was a steep cost. Coming up was tough, as Girls Can’t Surf makes clear, and the attitudes of the era didn’t help. Male surfers and journalists pop up in the movie and some of the soundbites from the ‘80s and ‘90s are startling, to say the least.

As Wendy Botha sums up in Girls Can’t Surf, “They are all such dumb ass chauvinistic pigs, that’s why.”