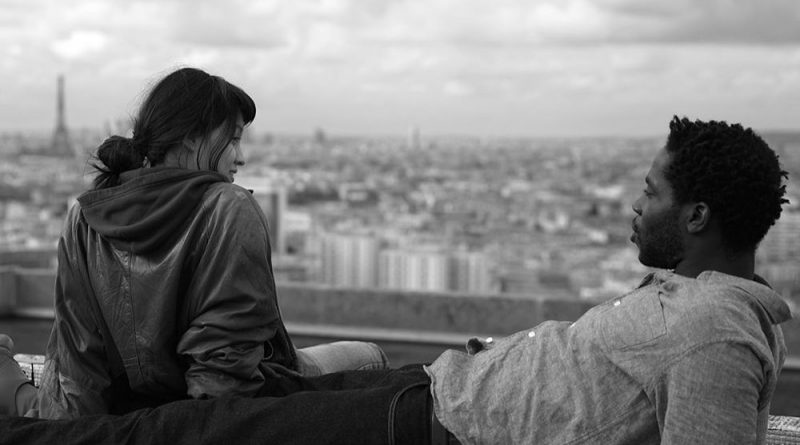 Veteran director Jacques Audiard’s Paris, 13th District (Les Olympiades, Paris 13e) is a beautiful film to look at, well-acted and full of commentary on a generation of contemporary Parisians. It does for the meandering lives and loves of thirty-something Parisians something akin to what Joachim Trier’s The Worst Person in the World did for Norwegian millennials. It won’t be for everyone, with its slow pace and explicit sex scenes.

Black-and-white cinematography infuses Paris with an elegant and slightly vintage feel – reinforced by handheld camera work and occasional use of split screen. This look plays off the film’s contemporary setting in one of Paris’s more modern arrondissements (the original title refers to the district of early 70s-era highrises that incorporates the city’s Chinatown) and a realistically multicultural cast.

Much like Trier’s Julie, Audiard’s Emilie (Lucie Zhang) and Nora (Noémie Merlant) are still figuring out who and what they want to be in life. Emilie is, in her parents’ eyes, squandering her college degree working as a tele-operator and waitress. She numbs her pain with party drugs and finds pleasure in sex with strangers – including new flatmate Camille (Makita Samba), a handsome academic.

At 33, Nora has moved to Paris from Bourdeau to attend law school, but when classmates gang up on her after mistaking her for an online sex worker, she drops out. Camille dumps Emilie and moves out, but she still hangs onto feelings for him. Nora, meanwhile, takes a job where Camille is working to put himself through a doctoral program, and the two strike up a relationship.

There is plenty of graphic sex in this film, scenes which also reveal a lot about characters – especially Nora, who struggles with intimacy, insecurity and ultimately her own sexual identity. Nora finds herself inexplicably drawn to the sex worker she bears the resemblance to (played by Jehnny Beth), and the two strike up a virtual friendship. In one scene, the two women fall asleep next to each other – via Skype. In an interview with AFC, Paris cinematographer Paul Guilhaume talked about the “silvery” look they were going for, which involved filming in color for a result in black and white, and using light from smart phones and tablets, “part of our characters’ worlds.”

Other scenes flesh out background about characters in more subtle ways, like Emilie’s strained relationships with her dying grandmother and family in Taiwan, Camille’s dad and stuttering 16-year-old sister still mourning the recent loss of their mom, and an inappropriate ten-year relationship that might explain why Nora is so fragile. These families are made to feel very natural, filmed up close (often without make-up) and at times with handheld cameras in average, almost anonymous apartment, street and office settings.

Camille admits his relationship with Nora doesn’t ‘fill the void,’ though what voids these young people are grappling to fill (or ignore) is left at least partially up for interpretation. Nora in particular is an enigma, and it’s unclear why all three characters seem to self-sabotage at times. All of this is reminiscent of the main characters of Trier’s Worst Person, among other films about this generation. Perhaps that’s why Paris‘s somewhat traditional – and satisfying – closure comes as a bit of a surprise.