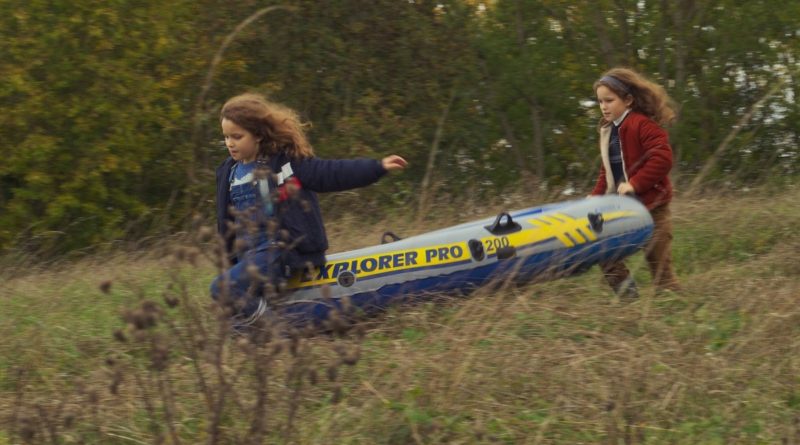 Does anyone really feel understood by their child or their parent? Children dream of the future, and adults often dream of the past. However much love is present, there’s always a boundary, chiefly created by the passage of time, keeping them from feeling completely connected to each other’s feelings in the moment. Those boundaries disappear in Petite Maman, Past meets the future in motion in Céline Sciamma’s spellbinding follow-up to her critically-acclaimed art-house hit Portrait of a Lady on Fire. The writer/director’s newest is a love letter to every child and parent who feels misunderstood, who have lost themselves to grief or have forgotten about the child inside themselves.

The film opens with Nelly (Joséphine Sanz) going from room to room at the maison de retraite (old folks home) where her grandmother has just died. Because she didn’t get to say goodbye to her beloved grandmother, she says it to all the other (exclusively) women living there. Nelly and her mother Marion, who is grieving the loss of her own mother, depart, and the family heads over to Marion’s childhood home to clear it out. It’s obvious mother and daughter are close. When Nelly’s father reveals Marion left without explanation early the next morning, Nelly goes into the forest to find an old fort her mother made years before. There, a girl her own age (Gabrielle Sanz) waves joyfully, and engages her in helping to reinforce the fort. She introduces herself as Marion, and it’s impossible to miss how much the two girls look alike. Nelly realizes that through some kind of magic, Marion her mother is Marion the child. She accepts it with a sanguine grace and childlike curiosity, giving in to a yearning for friendship and need for connection that clearly Marion shares.

Though most of scenes take place between the children, Petite Maman is never precious or cutesy, and Sciamma never reduces them as lesser characters than the adults. She and collaborator cinematographer Claire Mathon place the camera at Nelly and Marion’s level, where viewers can feel the kind of kinship the children feel for each other. Their dialogue captures the mix of innocence and wisdom present in kids that grief or illness has made precocious. In particularly poignant scene born out of the beautiful way children can be honest, Marion asks Nelly if she’s afraid her mother won’t come back. Nelly says she is, because she knows her mother often feels sad, wondering out loud if it’s her fault, to which Marion responds, “You didn’t invent my sadness.”

Sciamma is the quintessence of female filmmaking. In all her films, she values emotional intelligence, and uses the female lens to examine life and universal truths through stories about women’s experiences and relationships. Her female characters are multidimensional and exist on their own terms, often apart from, or with very little influence from, the men around them. A look here, the touch of a hand there, cooperation in a task together, a verbal exchange where a secret is shared or somehow reveals a character’s fears and hopes, these are her building blocks.

Hollywood and commercially viable international film has, over many decades, structured its financial success on a very binary, traditionally masculine model that values loud action over relationship building, and quick edits over languid visual language. Of course there are male directors who go against the grain, like Terence Malick, but they are seen as ‘auteurs’. Though far from financially successful, they are celebrated and given the means to continue their art. Female filmmakers place a high value on relationships and character as central to storytelling, but even those who do it best are not given auteur status. Sciamma deserves the label, to be sure. In her new film she proves once again her facility with creating intimate human portraits with authenticity, and her ability to show nuance while getting to the heart of her subject matter. With Petite Maman she creates an immersive experience, and one in which most women will see themselves in some way.

There’s a simplicity in this modern, magical realist fairy tale that belies the depth of understanding and comfort Nelly and Marion find through their friendship across time. They see each other’s vulnerabilities and give each other strength and unconditional love that will help both heal from loss. You can never have enough time with those you love, and you’ll never fully understand them, either. In Petite Maman, Sciamma is saying all that is ok, as long as you love deeply moment to moment, and try to do so with empathy.

EDITOR’S NOTE: This review was originally published on September 7, 2021, as part of AWFJ’s TIFF 2021 coverage.