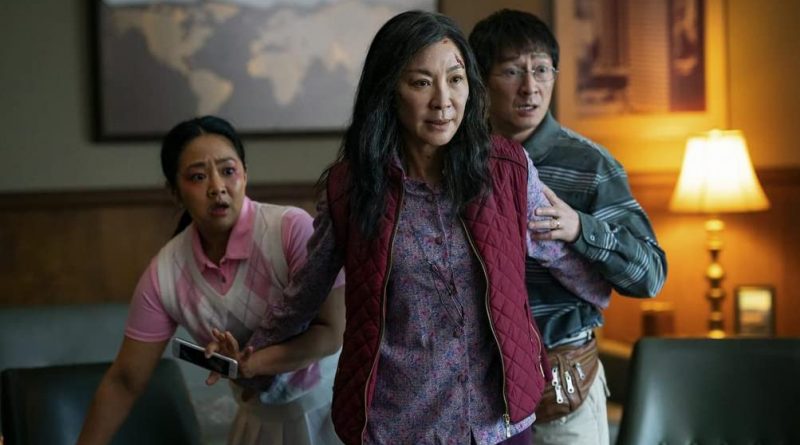 I found a quote awhile back that said how, for every choice we make, imagine there’s another version of us who made a different one, branching off into infinity. The idea wasn’t overwhelming but comforting to me, as if there were no missed chances or opportunities. Somewhere, I’d experienced them all.

The action-comedy Everything Everywhere All at Once takes this idea and kicks, flips, zooms, flies, and wiggles elongated fingers at it, creating the most unusual film you’ll likely see this year. It’s absurd, laugh-out-loud funny, and sneakily touching, an everything bagel of emotion that more than lives up to its title.

The writer/director team of Dan Kwan and Daniel Scheinert, known professionally as Daniels, earned a Sundance Film Festival award and kudos for their creativity, humor, and insights for 2016’s Swiss Army Man. That film depicted the friendship between a castaway (Paul Dano) and a farting corpse (Daniel Radcliffe).

But stick with it. In a recent interview at RogerEbert.com, Kwan said, “(I)t was like, ‘I am going to go so hard on the candy so I can show you how beautiful it can be to be absurd and stupid and live in a world where nothing matters.’” Everything Everywhere All at Once shows that it does matter, as absurd as it is, and it’s beautiful when you least expect it.

A stellar cast led by Michelle Yeoh (Shang-Chi and the Legend of the Ten Rings) holds this zany multiverse together. The martial arts veteran naturally makes her action scenes look effortless. She’s also funny, poignant, and incredibly endearing as Evelyn Wang, a put-upon Laundromat owner whose fractured relationships hint at her greater adventure.

Evelyn suffers from a massive middle-aged ennui. She lives above the business that she runs with her husband, Waymond (Ke Huy Quan), who playfully dots customers’ laundry bags with googly eyes. This irritates Evelyn, drowning in receipts at the dining table for a tax audit.

Her father, Gong Gong (James Hong, Turning Red), is another burden, grumbling about their lifestyle. Evelyn still yearns to please him and hurts Waymond and their daughter, Joy (Stephanie Hsu, The Marvelous Mrs. Maisel), in the process. She carps at her husband’s kindness and can’t summon the words to tell Joy that she loves her—or let Joy introduce her girlfriend, Becky (Tallie Medel), to her grandpa. The most Evelyn can manage is saying that Gong Gong is old school, and Joy needs to lose weight.

Meanwhile, the seen-it-all IRS auditor, Deirdre (Jamie Lee Curtis in a frumpy bob and a turtleneck with a belly bulge), suspiciously sorts through their records. Evelyn has submitted receipts for a karaoke machine and other hobbies, confusing them with business expenses, her husband says.

Evelyn’s cracked world breaks open during the IRS appointment when Waymond—or rather, a Waymond from another dimension—whisks her into a storage closet. His explains that his world is under threat by a powerful entity, Jobu Tupaki, and this particular Evelyn has a chance to stop it.

Evelyn is so beleaguered that her immediate response is that she has no time for this. But Other Waymond persists. She’s perfect, he says, not because she has some inner secret power of which she never knew, but because this version of her has failed at everything.

A backhanded compliment to be sure, but she’s a blank slate, with nowhere to go but up.

Evelyn soon gets a crash course in “verse jumping,” leaping from one possible life to another. Medium closeups center Yeoh as backgrounds rapidly cycle around her. While she glimpses the lives she could have had, she “downloads” the skills to help her quest (an homage to The Matrix, and yes, Evelyn dodges bullets). Yet she also ponders these lives—martial arts movie star, knife-wielding chef—as well as how to set her current world to rights. As she learns once she meets the nihilistic yet sad Jobu Tupaki, her choices don’t just affect her, after all.

Hsu is a deft partner, showing Joy’s pain and frustration, but Quan is excellent. Viewers will remember him as a kid in the 1980s films The Goonies and Indiana Jones and the Temple of Doom, where his characters bordered on caricature. Here, he aches with dimension and depth inhabiting a martial artist, multiverse guide, suave black-tie date, and a longing spouse, ready to serve Evelyn with divorce papers just to get her attention. She might see Waymond’s kindness as foolish, but he’s no fool, nor is his outlook on life.

Ultimately, the empathy in Everything Everywhere All at Once keeps the film from going completely off the rails. The film cares deeply for Evelyn, and Evelyn, it turns out, cares for her husband and daughter too, even if she’s been neglectful because of life wearing her down. It’s easy to say nothing matters, but harder to say that, even if that’s true, this moment matters—and let’s take what we can get.