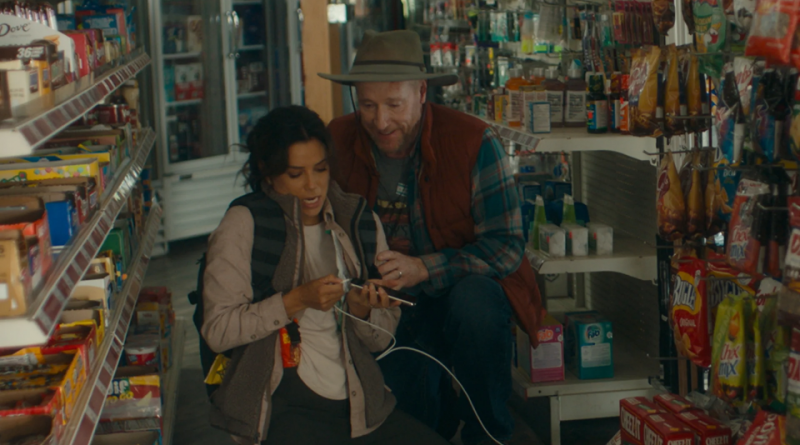 Social media and technology have been generally acknowledged to be both the saviors of modern society and the twin evils fueling a rapidly encroaching dystopia. The truth may be somewhere in the middle but for the sake of plot development, screenwriters like to embrace either extreme.

Unplugging goes all in on exploring the pitfalls of our addictions to our electronic devices, in a shrewdly satirical and slightly annoying way. The jokes don’t always land but the main characters are amusing enough to keep us journeying with them in their weekend escape from the pressures of email, texting, and roaming Wi-Fi connections.

Dan (Matt Walsh) and Jeanine (Eva Longoria) have hit a few speed bumps in their long-term relationship, which is due in no small part to their inability to extract themselves from their phones and iPads. Longoria is just a tad too shrill and too obsessive with her high energy focus on her career that leads to her taking her laptop to bed with her and emailing the office at 3am. Walsh plays Dan as good intentioned but just as lost in video games and his nascent gourmet hot sauce business. How their daughter Liz (Hala Finley) tolerates being under the same roof with such self-absorbed parents isn’t explored enough, but Finley conveys her frustration with frequent eyerolling. Soon her parents are off to a weekend getaway to reconnect with each other and disconnect from their electronics and we can’t help but cheer for the girl finally getting some quality time with her grandmother.

Dan and Jeanine find that the great outdoors isn’t always great, and phones lacking five bars of connectivity can be a great inconvenience, to put it mildly. Lea Thompson as Perkins goes full gonzo conspiracy theorist with a semi-feral raccoon sidekick and walks away with the film, even though whoever thought her up should maybe reconsider their strengths in character development. Her monologue about being an “analog gal” in a digital world is the highlight of Unplugging and makes Lulu the raccoon riding shotgun alongside her in her pickup less cringe worthy. Actually, the most laugh out loud moment comes as Dan and Jeanine venture into a gas station for supplies and the price to fill up is only $1.69 a gallon!

Will the couple reignite their passion for each other and survive their rural retreat? Well, they certainly go through a few things and their many tribulations may wear down the viewer’s patience but Unpluggable is an often-enjoyable satire that could use a bit more edge and less cute to be truly funny.