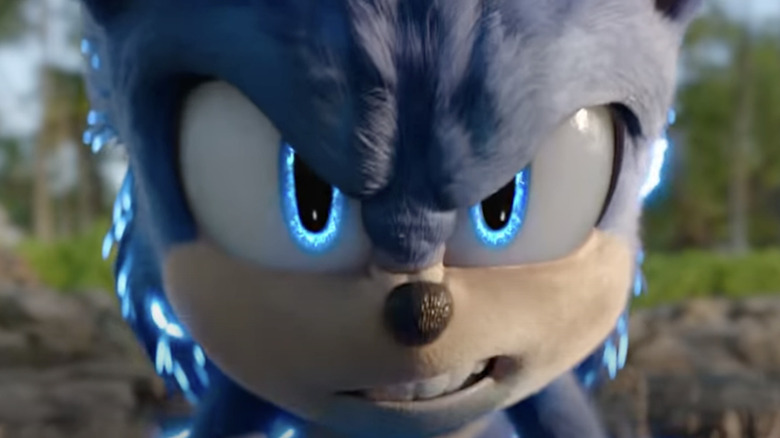 Whenever I’ve seen film reviews where the reviewer defers to a young guest, I know what that means: someone who can’t quite recommend something but recognizes they’re not the target audience. Reader, today that person is me.

Sonic the Hedgehog 2 is really not my taste or even in my wheelhouse—but my 12-year-old son, who knows the videogame franchise inside and out, found it excellent. Better than the 2020 original, he says, which introduced him to the wackiness of Jim Carrey. He’s probably extra forgiving here, even though he’s becoming a more discerning viewer. Lately, he’s taken to saying, “Plot device!” when he notices something obvious on streaming.

Sonic 2 is full of obvious beats—and a couple of plot holes as large as the precious golden rings that create portals for the titular speedy hedgehog to travel. To be fair, it also features sprightly animation and a voice performance from Idris Elba (The Harder They Fall) that’s worth the admission. He plays a noble alien echidna warrior and part-time pugilist named Knuckles, with drooping red spines like dreadlocks and giant white mitts with protruding knuckles. Knuckles has a killer handshake and the cluelessness of Thor or Wonder Woman first encountering life among us mortals. (His dry explanation of baseball had me grinning, as did his demand for sprinkles on ice cream.)

Sonic 2 doesn’t have the easy charms of its predecessor, where the speedy blue alien found a home in the outskirts of bucolic Green Hills, USA, with Sheriff Tom (James Marsden, The Stand) and his wife, Maddie (Tika Sumpter, Mixed-ish), a veterinarian. There, Sonic (Ben Schwartz) ran laps in an empty laundry dryer, read comics about the Flash in seconds, and loved toying with Tom on highway radar duty. His quills were a tempting energy source for Dr. Robotnik, aka Eggman (Carrey), whom Sonic zapped via portal to a planet populated by mushrooms. The doc’s quest this time around is to make the speedster pay.

As Sonic 2 begins, Sonic itches to use his super-speed for heroics. Tom earnestly counsels him on how he’ll find the right moment to do so (curiously addressing the camera as if speaking to Sonic, even though the animated Sonic and the actor populate the screen well together). Although Tom and Maddie worry about the little guy, they set off to Hawaii via portal for the wedding of Maddie’s sister, Rachel (Natasha Rothwell, Insecure), to Randall (Shemar Moore of Criminal Minds, whose good looks are played as causing Marsden insecurity).

Meanwhile, Sonic parties at home with the family dog, giving the animators reason to cut loose with a lot of tween-cool poses and humor. He also meets Tails (Colleen O’Shaughnessey), a twin-tailed fox and inventor from another dimension who warns him about Robotnik. And the all-powerful Chaos Emerald. Or something.

Schwartz voices Sonic with a kidlike cockiness that comes across more as determined bravado than being insufferable. (I found Tails more grating, for which my son glared at me.) Knuckles at first throws his lot in with Robotnik, but even those unfamiliar with the games can guess how long that alliance lasts.

Director Jeff Fowler, returning from the original Sonic, frames the brawls between Sonic and Knuckles as a fun twist on those who-would-beat-whom bouts, and the action is easy to follow, even with the fighters’ neon streaks of blue and red. It’s also enjoyable, such as when Sonic dodges beams from Robotnik’s drones like a game of laser tag during a snowboarding chase down a mountainside. Fowler has less success with the wedding humor, but that plot eventually dovetails with the furballs while knowingly nodding at action sequences from other films.

Carrey’s elasticity and goofiness in the original filled me with amused nostalgia (and made my son a fan of his turn in The Mask). His jokes don’t land nearly as well this time around, but if there’s anyone who can sell chasing a bipedal hedgehog for revenge—and in one outlandish contraption after another—it’s Carrey. A mid-credits scene left my son and older Sonic fans in our screening cheering and forecasts that yet more fur will fly.