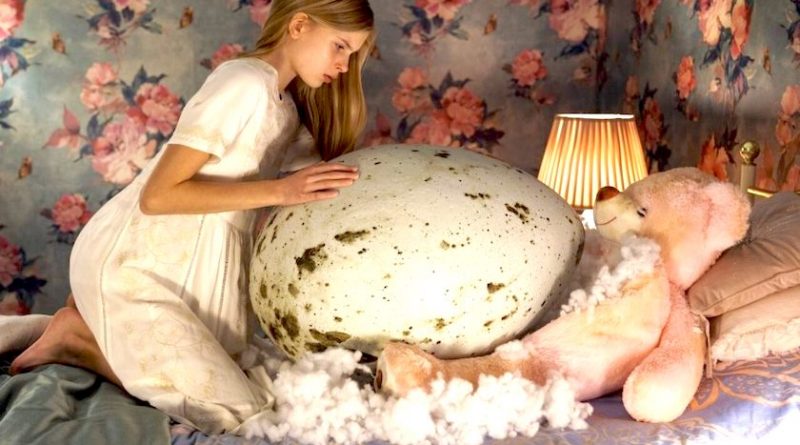 The debut film from director Hanna Bergholm, Hatching is a bold Finnish body-horror that offers a new take on the doppelganger story.

Written by Ilja Rautsi, Hatching is first and foremost a tale of motherhood. Tween gymnast Tinja (Siiri Solalinna) is a lonely girl who will stop at nothing to impress her unnamed influencer mother (Sophia Heikkilä). Starving herself and giving up on outings with classmates for her sport in order to win the approval of a mom who hides behind the sunny Instagram filters of the perfect modern Finnish family for her “Lovely Everyday Life” blog. Obsessed with appearances, Tinja’s mommy-blogging mother is not seeking a truly authentic family life, but one of smoke and mirrors expertly curated to inspire envy in her many followers.

When a large black bird crashes into the family’s idyllic pastel home, Tinja becomes caught up in the aftermath, venturing into the woods to find the injured bird. Returning with a single egg, Tinja lovingly protects it as it soon grows to an alarming size. However, the thing that hatches from the blood and guts-soaked shell is less a bird and more of a skin-and-feathered thing caught somewhere between horror movie monster and cuddly fantasy creature.

The giant bird-like creature named Alli begins to act out the dark impulses of Tinja who comes to reckon with her own lack of self-worth, innate desires and jealousy simmering below the surface of her picture-perfect life.

Once Alli hatches the 86-minute story treads some familiar ground, but the execution makes Hatching a fascinating case study.

Raw, bloody body-horror elements splatter against the overwhelming pink backdrop of sunny Finnish suburbia. Production designer Päivi Kettunen’s sets create whimsical absurdity and humour and make the horror elements all the more eye-catching. But viewers shouldn’t be fooled by the pretty sets and costumes because this is definitely a horror film – and one that may rob them of their appetites.

Alli herself is a thing of grotesque beauty, thanks to animatronics supervisor Gustav Hoegen who is responsible for the practical creature effects team at LucasFilm, working on Rogue One and the recent Star Wars trilogy. The creature effects and production visuals combined with the performance by Solalinna more than make up for what the simple story lacks in depth beyond the floral wallpaper and pretty pastels.

Newcomer Solalinna is a revelation as the timid girl who learns to come out of her shell with the help of the violent creature. Brimming with anxiety and a desire to please, the young actress really comes into her own on screen by the time the film reaches its climax. And it’s a real doozy of a climax.

An effective first feature, Hatching is a promising start for both Solalinna and Bergholm.