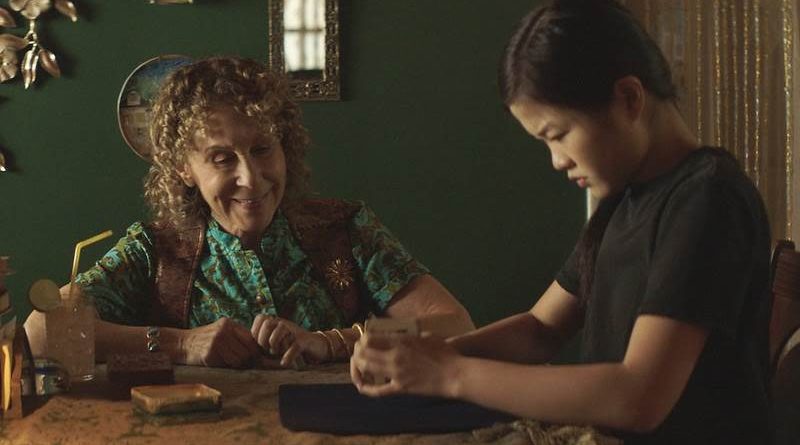 Actor Miya Cech is not even five feet tall and just turned 15, but she already has quite the resume. She was recently named by Refinery 29 as an “unforgettable Breakout Star” of the 2021 Sundance Film Festival for her role as Sammy Ko in Marvelous and the Black Hole. Cech, born in Japan and raised in California, brings that resume of modeling and acting in television series to this film.

But, really, all she had to bring was the stereotype of a sullen teen. Sammy Ko is not a happy camper. She edges close to being a juvenile delinquent after a particularly difficult year. In the way of smart, sad girls, Sammy throws caustic, but funny, one-liners, written by director Kate Tsang. Motherless, Sammy listens to tapes of her mother as she grieves and puts up with her bossy big sister. Sammy self-tattoos as much to identify herself as to harm herself with needles. Her father insists, however, she take a summer school class in small business.

While playing hooky, Sammy finds herself being sucked into assisting Margot, a magician at a pre-school. Margot brings the Wow! factor, for she is magical in more ways than one. She is seductive and secretive, but can she trick Sammy the way she pulls the wool over little children’s eyes?

Margot recognizes Sammy’s pain and even understands Sammy’s hesitation to believe in magic. “Magic is about making an audience feel something,” Margot instructs Sammy and then encourages her to scream into a chicken.

The plot follows a formula, which Tsang honors while adding sharp edges — not sharp enough to be inventive, just deckled enough to keep it interesting. The other thing Tsang does is make the audience care, both about the girl and the magician.

By casting Cech, Tsang found the perfect Sammy, all pout and pain and promise. In casting Rhea Perlman as Margot, Tsang found the perfect surrogate mother/magician, for Perlman brings the audience affection that she earned as Carla in Cheers. Margot is Sammy’s opposite, also part of this formula, but each teaches the other, and that’s what an audience wants to see — and feel.

Marvelous and the Black Hole does not carve new pathways, but it satisfies the heart in an hour and 20 minutes.