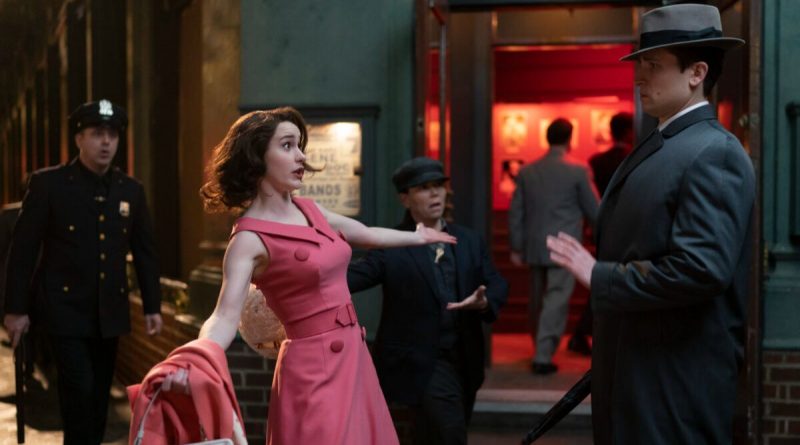 If you haven’t seen The Marvelous Mrs. Maisel, you’ve been missing a screwball comedic delight. Season 4, set in the tumultuous 1960s, a decade of cultural awakening, once again revolves around the trials and tribulations of a Manhattan-based stand-up comic pioneer, played by Rachel Brosnahan.

Season 3 concluded with Miriam “Midge” Maisel being abruptly fired by crooner Shy Baldwin (Leroy McClain) from their eagerly-anticipated European-tour, placing her at odds with her cantankerous manager/best-friend, Susie (Alex Borstein), who gambled away Midge’s earnings.

Declaring, “I’m not ready to be a failure yet,” along with “I wanna be me every time I go out on that stage,” indomitable Mrs. Maisel becomes MC at The Wolford strip club, where she’s determined to improve the strippers’ working conditions and upgrade the club’s tacky atmosphere/clientele.

Midge’s devotion to her job appalls her staid Jewish father Abe (Tony Shalhoub) and humiliates her match-making mother Rose (Marin Hinkle). But, as an Upper West Side single mother, supporting her family, Midge has gotta work.

Institutionalized after her disastrous Broadway show, rival comic Sophie Lennon (Jane Lynch) is now also Susie’s client and controversial Lenny Bruce (Luke Kirby) comes back into Midge’s life, just as his career is coming to a close. In real life, Bruce was convicted of obscenity in 1964, causing him to be blacklisted from every major comedy club in the country.

On the Granger Gauge of 1 to 10, the eight-episode 4th season of The Marvelous Mrs. Maisel is an energetic, amusing 8. Sources say the series, which has already won 20 Emmys, will conclude after season five. So I’m curious to see where Midge’s journey will end.