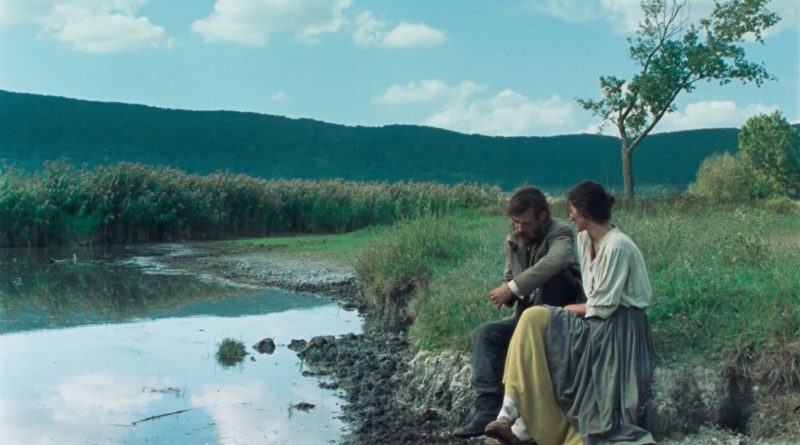 The Tale of King Crab is a moody Italian drama that weaves a wandering narrative of misfortune, desperation and redemption. It could potentially be read as a treatment on mental illness and alcoholism, or perhaps on the imprecision of oral histories. Either way, it is at its core a story of, by and for men split into two very different chapters, one shot in Italian and the other in Spanish.

Scruffy, long-bearded Luciano (Gabriele Silli) is an outcast in his village in the 1800s. Back from institutionalization in Rome, he is struggling to keep his consumption at bay. His reputation will also keep him from being allowed to pursue the love of his life, Emma (Alexandra Lungu), whose father does not approve of their relationship and has plans to attach her to the local prince.

Meanwhile, Luciano is uniquely angered by the prince’s closure of a walkway near the palace. He breaks down the locked door and eventually sets fire to it. There is surely a larger question at stake about the entitlement of nobility, and Luciano enrages the prince’s guards by calling them “pawns,” but any resentment is left otherwise unexplored.

Viewers may in fact feel a lot is left unexplained in this movie. Luciano’s tale is told, partly sung, by a gathering of elderly men in a bar in contemporary times. They introduce the story and appear again midway to discuss some of the details. Their recollection of the tale feels almost improvised, and they dispute some of the specifics. The story has been passed down over generations from a time ‘before there was television.’

The structure of the film further emphasizes the unreliability of the tale we are being told with a back-and-forth narrative that teases parts of the story then flushes them out with explanations later. While King Crab is slow-moving and will likely turn some audiences off, this narrative structure does help keep an enigmatic tale interesting.

This is particularly true in the second half of the film, which is broken into two chapters. Here, Luciano has been exiled to the southern tip of South America known as the “land of fire” (Tierra de Fuego). He’s dressed as a priest and competing against other bandits seeking storied treasure left in the region. Why he was exiled and how he came to be taken for a priest are explained later. The harsh conditions and promise of gold pit a motley group of men against each other in violent ways.

Adding to the mood is a trade-off not just in setting but also in style and tone from the first to the second chapter of the movie. We start in a leafy Italian village where Luciano and Emma frolic in the lush overbrush surrounding a sparkling lake. There’s a lot of close-up, handheld camera work. When the action moves to Argentina (and the dialogue switches from Italian to Spanish), the camera starts to take a wider perspective, particularly towards the end as the men duel it out on an expansive rocky terrain filmed strikingly from the air.

Luciano is a bit of a mystery as well, a man of few words and piercing blue eyes who has seen better days. “I feel empty,” he confides at one point. “I’m nothing but a drunk.” His is a sad and violent tale, and its moral or the point of the movie as a whole feel very much up for individual interpretation.