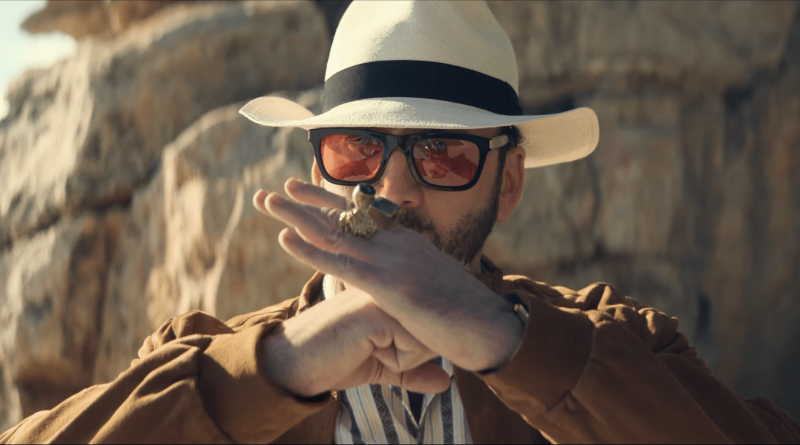 Since making his acting debut 40 years ago, Nicolas Cage has amazed, shocked, surprised, and confounded audiences. With over 100 acting credits to his name, The Unbearable Weight Of Massive Talent finally delivers the role Cage was born to play – himself.

The most Nicolas Cage movie to ever exist, The Unbearable Weight Of Massive Talent stars the Oscar-winning actor as Nick Cage, a cash-strapped actor who is ready to give up on Hollywood when he’s offered a paid appearance at a Spanish billionaire and Cage superfan’s birthday party. Reluctantly agreeing to the easy payday, Cage gets tapped to become a CIA informant when it is revealed that birthday boy Javi (Pedro Pascal) is actually a drug kingpin involved in a high-profile kidnapping. The actor must now tap into some of the iconic roles he’s played as the line between his life and career blur.

The movie is as zany as one might expect but instead of just being a string of jokes or references, it manages to pull together a cohesive- if utterly unbelievable – storyline that’s fresh and funny with a cast that truly sells the idea.

Written by Tom Gormican in 2019, Cage turned down the part three times before he was sent a letter by the writer telling him the movie was an ode to him and not a mockery of the actor or his career. There is a kernel of truth to the story here. Like his on-screen counterpart, the real-life Cage had reportedly blown his fortune through his spending habits and had been using his VOD roles to pay off his excessive debts including $6.3 million he owed to the IRS in property taxes. Gormican, who also directs the film, convinced Cage that the movie would celebrate his previous roles which the finished project most-certainly does.

From references and callbacks to everything from Con Air and Face/Off to Guarding Tess and The Croods 2, it is undoubtedly clear that this is a movie by Nicolas Cage fans, for Nicolas Cage fans. It is these diehard fans that will get the most fun out of movie that may be too meta for the casual viewer.

Here present-day Cage interacts with an imaginary younger version of himself throughout the film. Looking like a 1990 vision of himself in a Wild At Heart t-shirt, this digitally de-aged Cage is both eerily uncanny and a clever homage, providing an internal dialogue that might not be too far from reality on what the younger Cage would think of his more-recent string of roles.

The real standout in the film is quite obviously Cage, who, like almost every role he takes on, gives it his all. He embraces the wacky and colourful characters he has played in the past. Here, he is in on the joke, which is the only way Massive Talent would ever be able to work.

The chemistry on-screen between Cage and Pascal is dynamic. This really feels like Pascal is riffing with his favourite actor of all-time. It’s a delight to see Pascal in a comedic role. There are moments of pure joy and friendship as the duo share laughs and trade stories about their favourite films.

The supporting cast including Sharon Horgan as Cage’s ex-wife, Lily Sheen as the couple’s daughter Addy, and Tiffany Haddish and Ike Barinholtz as CIA agents, are present for more than just to pay lip service to Cage. Each has a different relationship and attachment to Cage, his films, and his Cage-isms which keeps the movie from simply fawning over the actor.

While The Unbearable Weight Of Massive Talent might not draw in any new Cage fans, it will be nothing but a good time for those who already laugh at the memes, quote The Wicker Man, and genuinely appreciate all that Nicolas Cage has to offer.

This is also one story that has a real-life happy ending: Cage is reportedly now “debt free” after signing on to The Unbearable Weight Of Massive Talent.