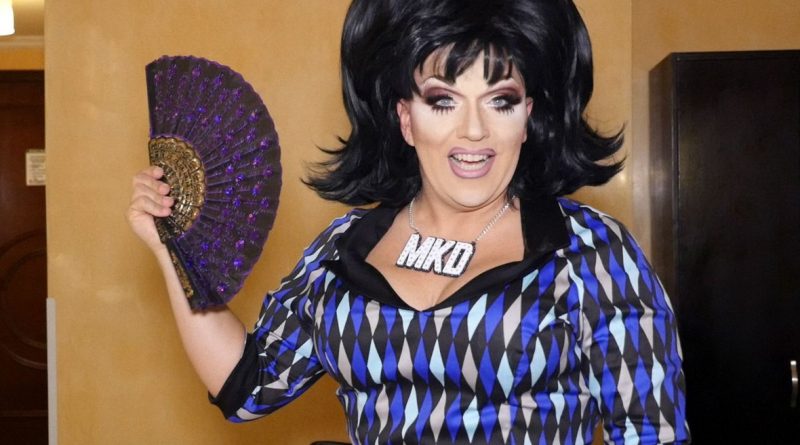 When Isaac Mizrahi called Mrs. Kasha Davis a ‘workhorse queen’ on RuPaul’s Drag Race, those of us who know and love drag beyond RPDR knew what he meant. There is a whole country full of drag artists, from sea to sequin-sparkling, shining sea, that work without the benefit of national and international television. They hone their routines, enhance their makeup, and ceaselessly practice their death drops or deadpans or whatever their personas use to capture their audiences. Not because their being televised, but because for them, drag is a calling. Many have done and still do it for decades. They get the job done. They inspire the newer generations. What they often don’t do is make much money. The new documentary Workhorse Queen profiles someone who stands in the middle between RPDR fame and relative obscurity, Ed Popil, and his invention or alter ego, Mrs. Kasha Davis.

Writer/director Angela Washko’s film follows Ed Popil both in and out of drag, as himself and as Mrs. Kasha Davis. Washko doesn’t just show MKD’s rise and fall, she starts from Popil’s life in largely closeted Scranton, before he discovered drag, sharing his struggle at trying to be straight, married to a woman, and happy, none of which worked together for him at all. In interviews and voiceovers, Popil takes us through his divorce, acceptance as a gay man, discovery of a new world in P-town, and on to Rochester, where he found his tribe with a talented, but largely unsung group of drag queens. Interspersed are insights from Popil’s husband Steven Levins, who figures prominently in the rise and relative success of Mrs. Kasha Davis. After auditioning 7 years in a row for RuPaul’s Drag Race, he finally gets on the show, only to be sent home early in the season. Alcoholism, ageism, depression, and the will to be authentic and happy guide the rest of Popil’s story, in a documentary that benefits mightily from the intimacy and honesty of all the interviewees.

There’s a moment during one less successful outing when Ed is particularly candid and blunt. “Uh oh.” he says, “This is the part of the day when the foam padding starts ripping the hairs out of my asshole.” He goes on sarcastically, “That feels great. Cuz it’s friction, friction, friction, friction.” There’s no glorifying the life of a drag queen here. Still, Popil is nothing if not optimistic and determined. He finds a way to take his catchphrase “There’s always time for a cocktail!” and tailor it to a new sober life. It not only works, it gives new depth to the persona. Though he credits RPDR for creating huge forward movement in the acceptance and embrace of the drag experience, he and one friend who never makes it onto the show throw some not always so low-key shade at how ageist the show and the larger drag world can be.

It’s gratifying that Washko can capture the positive resolution to Popil’s disappointing experiences by the end of the film. As this workhorse queen himself explains, “I realized I can have an impact on people’s lives doing the work that I love, right here at home in Rochester.” This truth, and the sense that this queen is one of the good ones, is reinforced with interviews from folks in Rochester that speak to Popil’s endless and genuine support of the community. All in all, for those who find drag entertaining, or even for those who just find diverse voices compelling, Workhorse Queen will create a deeper respect for all the drag artists out there who aren’t in the celebrity spotlight but find their voices anyway,