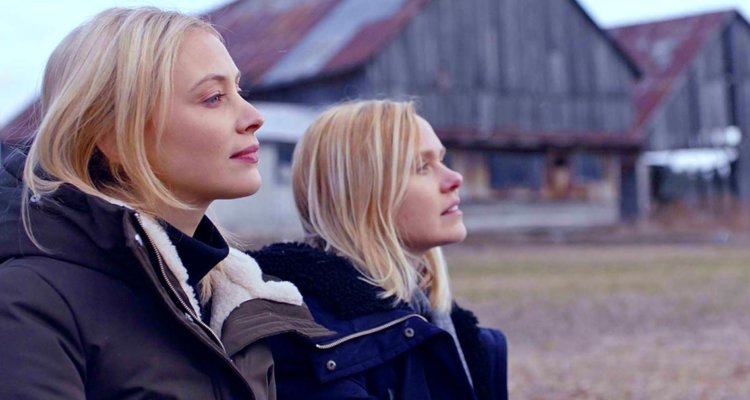 If you’ve lost someone to suicide, All My Puny Sorrows is not a film to watch. I mean no disrespect to writer/director Michael McGowan or the talented cast. The performances are strong all around, especially from Alison Pill as a woman painfully and poignantly trying to convince her sister that life is worthwhile. Some viewers will nonetheless find this too much to endure.

Based on the best-selling novel by Miriam Toews (based on her experience with her sister’s suicide), All My Puny Sorrows takes its title from a Samuel Taylor Coleridge poem, where the narrator too had a sister. “She lov’d me dearly, and I doted on her! / To her I pour’d forth all my puny sorrows,” he wrote.

Yoli (Pill, Star Trek: Picard) wishes her sister, Elfrieda, would confide just what pains her so intensely. Elf (Sarah Gadon, Black Bear) is a gifted concert pianist with a loving husband (Aly Mawji, Silicon Valley), a gorgeous home, and enough money to not want for anything. Yet she weeps alone after a brilliant performance, unable to feel the thrill or joy in the music she makes.

Yoli is a novelist who feels like a hot mess by comparison. She hasn’t yet signed the divorce papers ending her 16-year marriage; yet she’s taken a boring lover or two to make up for lost time.

She frets over the phone to Elf, wondering if she’s peaked. Elf listens patiently and openly, responds with wry comments, then later cuts her wrists. “We have to stop meeting like this,” she tells Yoli in the hospital, a hint that this wasn’t her first try.

Yoli won’t share with her the subject of her latest novel, but viewers hear pieces in voiceover, musings about whether suffering is inherited, like colorblindness or flexibility. The sisters and their family certainly have had their share. Their father (Donal Logue, What We Do in the Shadows) killed himself by walking in front of a train when they were girls. Their mother, Lottie (Mare Winningham, Dopesick), and Aunt Tina (Mimi Kuzyk, Y: The Last Man) have buried fourteen siblings.

Keeping them afloat is a flinty sense of humor. Yoli wonders why Elf mentioned her toward the bottom of her suicide note. “I didn’t want this to go to your head,” Elf replies. When the car dies, Lottie remarks that the metaphors are “popping up all over the place.” Even Yoli’s teenage daughter, Nora (Amybeth McNulty, Stranger Things), is dry to the point of being almost too sassy, considering her aunt’s circumstances.

McGowan dribbles out some of the sisters’ Mennonite upbringing in flashbacks, where Logue’s eyes show a distance and loss that his family doesn’t notice. Yoli wonders how she and Elf grew apart. All My Puny Sorrows doesn’t delve into Elf’s mindset in the way a similar film, A Mouthful of Air, reveals a suicidal state of mind. But it’s wrenching all the same. To Yoli, Elf is an enigma, and McGowan frames their talks in closeups and medium shots as they spar and parry, yet often sets Elf in wide shots by herself. The film’s muted palette is like a snowfall, dampening the colors and the hope that Elf confides fades every day.

The sound of a freight train clacking along the tracks runs underneath her piano playing and between scenes, as if haunting the sisters. Instead of therapy, Elf latches onto the idea of going to Switzerland, where she can die in a clinic because she doesn’t want to die alone. Yoli begs her not to die at all. Pill shows Yoli walking an agonizing tightrope: feeling desperate to understand her and save her, and desperately wanting Elf to know how much she’s loved. Gadon, meanwhile, shows Elf’s overwhelming isolation, her pain a mystery even to herself, and trying to stop the sorrow is like halting an onrushing train.

It’s hard for me to say if All My Puny Sorrows is thoughtful and wrenching because of the craft and care put into it, or because of my own experience. A friend of mine took her life a few years ago. We worked together, met for lunch or dinner, and she babysat my son. She was married with two children, a few years older than me, and encouraged me before I was pregnant about being an older mom. I’m now almost as old as she was. I didn’t know how much she hurt, and I didn’t know for a long time how she died, but I think about her a lot.

A film like this doesn’t make that any easier. Even with its characters’ humor, All My Puny Sorrows has hurt and grief that runs deep.