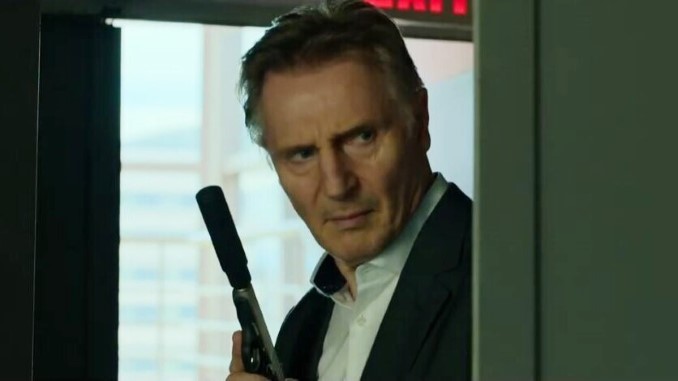 It has been two and a half months since we last saw Liam Neeson kill someone. Well, in the Hollywood timeframe context, that’s just too long. The filmmakers who produce Liam Neeson movies must have a short memory because all Liam Neeson’s films are the same: I will look for you, I will find you, and I will kill you. This time around, Neeson is the bad guy with a heart in Memory, which is an El Paso set and shot remake of a 2003 Belgian film (De zaak Alzheimer) about a cognitively impaired hit man. Neeson plays Alex Lewis, a hired killer (shocking casting, for sure) who is ready to retire due to early onset dementia, but he has been persuaded to take just one more job — his last. However, when he refuses to finish the job, he realizes he has become a target for both the police and for the criminal organization who hired him. Lewis, we see, is an assassin with certain standards: he does not murder children. However, in less than two hours, he does kill no less than 10 other people — all of whom are adults — whether they deserved death or not. Memory is paint by numbers cinema. The action, the characters, the dialogue, even the way they talked in that deep-voiced whisper are all cliche. Or maybe the plot and dialogue just don’t translate well from Dutch? You gotta hand it to Neeson, though, he is almost 70 and he keeps cranking out the potboilers. He must have gunpowder burns on top of his gunpowder burns. Memory is watchable, my husband, Ricky, gives it two eyes open, but you’ll forget it later.