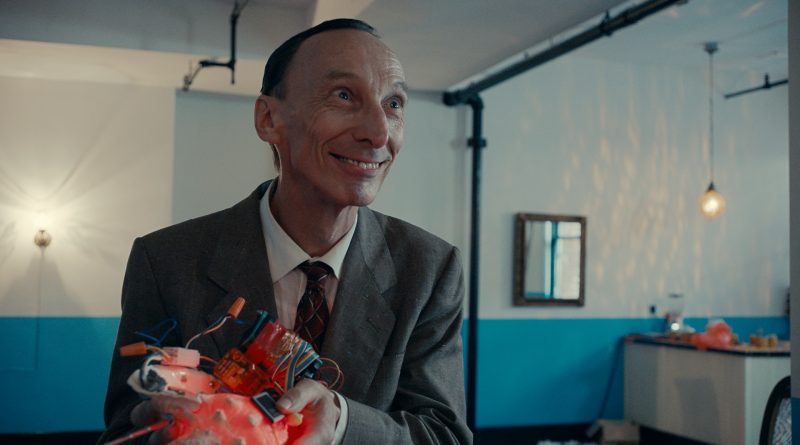 If the “D” stands for that in Roald Dahl’s surname, Stanleyville radiates big D energy like few other films this year. Forget anaemic, milquetoast descriptors like “quirky” or “oddball”, Stanleyville is no giddy confection; rather, it heads straight first into proudly weird territory in the best way possible.

The film begins as suburban mother Maria (Susanne Wuest) calmly snaps; she leaves her indifferent family, throws her purse and all her money in a trashcan, and aimlessly wanders a shopping mall, numb in her emptiness. It is here that she is approached by the intense, mysterious bureaucrat Homunculus (Julian Richings) who tells her that she has been chosen along with four others to participate in a “platinum level contest” which will “probe the very essence of mind/body articulation”. The prize is a habanero orange SUV, but this is not what Maria desires; rather, it is the promise of “authentic personal transcendence” that lures her to accept the offer, sensing it as a possible pathway out of the pit of existential ennui in which she has found herself.

What plays out from here on paper might draw comparisons to the subgenre of sort that is the “human game” narrative, spanning everything from The Hunger Games to Squid Game. But without ever feeling smugly parodic, Stanleyville eschews this legacy and drifts into something altogether far more absurdist in nature. Along with her delightfully named fellow competitors Andrew Frisbee Jr (Christian Serritiello), Felice Arkady (Cara Rickets), Manny Jumpcannon (Adam Brown) and Bofill Pancreas (George Tchortov), Maria must go through a series of rounds of increasingly illogical and apparently random “competitions” until the player with the highest score wins. There to enforce the rules, Homunculus is no omnipotent gamemaster but rather a grunt there to do the job he has been told to do, and as the strange personalities that surround her are stripped back to their rawest and crudest beliefs and desires, Maria discovers things about herself, too.

Stanleyville is no multiplex-pleasing popcorn munching time-waster, nor is it brow-creasing pompous capital-A, capital-C Art Cinema, either. While perhaps intentionally not for everyone (how can something ever be for everyone?), there is a rare sense of purity and sincerity to Stanleyville that make it almost inexplicably enthralling, while still remaining very, very funny. One of the year’s hidden treasures, this is not to be missed.