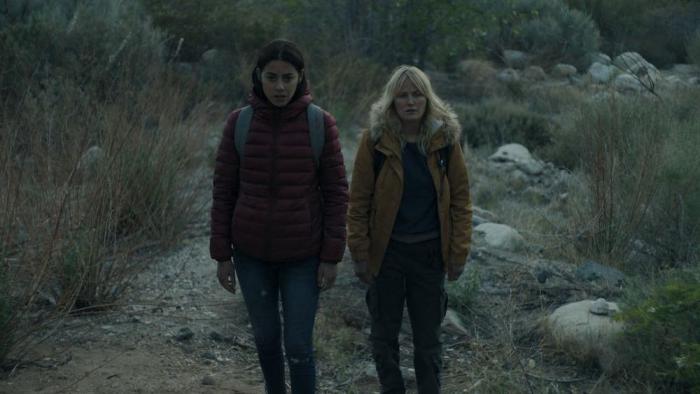 ​Blair (Lorenza Izzo) and Jillian (Malin Akerman) are on the run, on foot, trying to escape the New Mexico desert. Desperate and disoriented, they are fleeing a cult called Skylight – although Blair doesn’t like to use the “c” word – led by the charismatic, psychologically manipulative Seth (Chris Messina). Estimating a three day walk before they reach civilization, half-remembered girl scout survival tips come in handy as unexpected challenges thwart the women’s plans. Soon, however, they realize they have much bigger obstacles to contend with as they face the reality that Seth has such a strong psychological hold on them that physical escape only just scratches the surface.

Lean and low-key, The Aviary relies very heavily on the performances of its two central actors, who fully understand the assignment and do not waver. A tight screenplay written by the film’s co-directors Chris Cullari and Jennifer Raite forms a solid foundation for these vital performances to play out upon, the intensifying drama rising and falling with satisfying peaks and troughs with an emotional rhythm that keeps the film constantly moving. In practical terms, this largely disguises the fact that what we are really just looking at is two women walking around for an hour and a half.

Seth himself appears in random and unexpected ways, the menacing patriarchal forces that govern the film thematically nicely abstracted so that – just like Blair and Jillian – at times we find it difficult to distinguish what is real and what isn’t. And just as impressively, this is no reductive “girl power” love-in, either; the relationship between the two women is complex, difficult, and at times very, very dark. A nice lesson in showing how with a good idea and solid talent you can do a lot with a little, The Aviary is a satisfying watch that packs a nice solid punch.