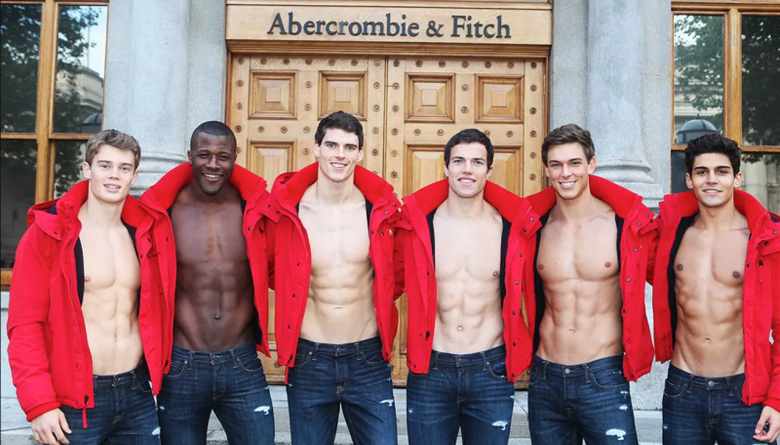 Pulsating music, louvered blinds over the windows, and cutouts of topless male models flanking the door. Any mallrat in the early 1990s recognizes this venue immediately—not a nightclub but the overpriced clothing store Abercrombie & Fitch. A retail behemoth in its heyday, the brand sold not just jeans and T-shirts but an all-American preppy aesthetic, captured in black-and-white photos featuring lots of nubile twentysomethings and closeups of chiseled abs.

But as the documentary White Hot: The Rise & Fall of Abercrombie & Fitch explores, that “all-American” ideal didn’t apply to everyone. A&F might have burned white-hot while expanding nationwide, but the “cool kids” it unapologetically targeted for its customers and employees were overwhelmingly stick-thin, WASPy, and white.

Director Alison Klayman (Ai Wei Wei Never Sorry, The Brink) collects a variety of interviews from former A&F staffers, including recruiters, models, and marketers, as well as journalists, bloggers, and activists. They piece together both the swift expansion of the retail chain, which once sold elite outdoorsy gear to Theodore Roosevelt and Ernest Hemingway, and how its pride over its exclusivity eventually tarnished its reputation.

Airing on Netflix, White Hot moves along briskly enough at an hour and 28 minutes, with montages of A&F ad campaigns set to music of the 1990s and 2000s between the interviews. Nevertheless, the film takes about half of its running time to establish what made the brand so aspirational before it gets to the problems behind that polished facade of youth culture and sex appeal. (One journalist amusingly notes that when she first set foot in the place, she thought, “They’ve crystallized everything I hate about high school and put it in a store.”)

Former sales clerks who united in a class-action lawsuit against A&F recall how this cool mystique entranced them, too—until they kept having to work in the stockroom, wash windows, or work nights. Some got scant hours because of former CEO Mike Jeffries’s constant edict to bring in “good-looking people.” There was in fact a book outlining “what good-looking looks like,” one ex-manager shares. It specifically listed dreadlocks and gold jewelry as no-nos.

Although the company wound up under a six-year consent decree, it had other racist issues, such as graphic tees with Latinx and Asian stereotypes. The filmmakers don’t push nearly hard enough on the former merchandising exec who says, “We were always trying to be quick-witted” as an explanation; but they do laugh out loud when one former recruiter says of the employment practices, “It wasn’t not racist.”

White Hot also briefly touches on other court cases: the 2015 Supreme Court finding that the retail chain violated the Civil Rights Act of 1964, and lawsuits against photographer Bruce Weber accusing him of sexually abusing several male models. (Neither Weber or Jeffries agreed to comment in the film.)

The film includes sympathetic and pointed comments from activists and cultural critics, such as one who wonders if you can truly “sell” inclusion when you’re trying to sell a V-neck. Yet White Hot is perhaps best viewed as a peculiar time capsule. Here’s a brand that hit the zeitgeist through old-fashioned advertising, not Instagram, a bubble of proud privilege that cracked once social media grew enough to amplify marginalized voices. As one ex-employee puts it, “Some of that aura went away precisely because exclusion was the root of their success, and exclusion itself stopped being quite so cool.”