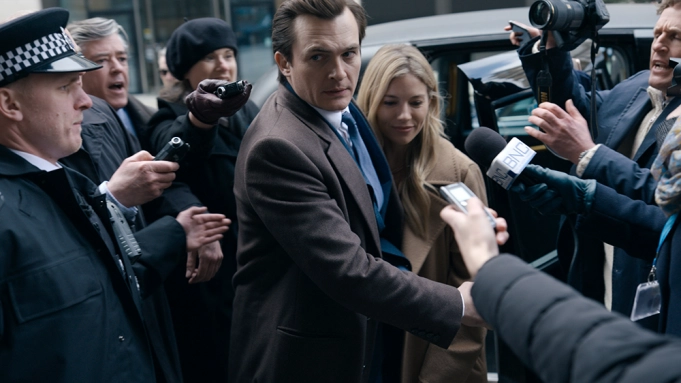 If you’re eagerly anticipating the release of the new Downton Abbey movie, start by admiring the versatility of Michelle Dockery – best known as Downton’s Lady Mary Crawley – playing a London Barrister determined to convict a high-profile rapist in the six-part Netflix series Anatomy of a Scandal.

Arrogant, aristocratic James Whitehouse (Rupert Friend) is a respected Member of Parliament; he’s a Tory government minister who has a longtime, close friendship with the Prime Minister (Geoffrey Streatfield) since they were both members of the elite Libertine Club at Oxford University.

Charming James and his attractive wife Sophie (Sienna Miller), who also went to Oxford, live in London with their two children and a nanny.

Suddenly – and quite unexpectedly – their seemingly idyllic, entitled lives are disrupted when he’s accused of rape by one of his aides, Olivia Lytton (Naomi Scott) with whom he, admittedly, had an adulterous affair.

As the story unfolds, no-nonsense Prosecutor Barrister Kate Woodcroft (Michelle Dockery) faces off against Defense Barrister Angela Regan (Josette Simon), although it seems workaholic Woodcroft has some dark secrets of her own, deeply hidden in her past, noting: “Prosecuting sexual assault is as urgent as it is frustrating.”

Curiously, however, the focus seems to be on distraught Sophie’s reaction as she listens to the intimate details of James’ five-month-long liaison which led to Olivia’s graphic accusation of rape. Sophie’s apparent belief is that her devious husband is “a bit assertive but not brutish.”

FYI: The fictitious Libertine Club is based on the real-life Oxford University drinking-and-dining Bullington Club that originated in 1780 as a hunting-and-cricket club.

On the Granger Gauge of 1 to 10, Anatomy of a Scandal is a suspenseful 7 – streaming on Netflix.