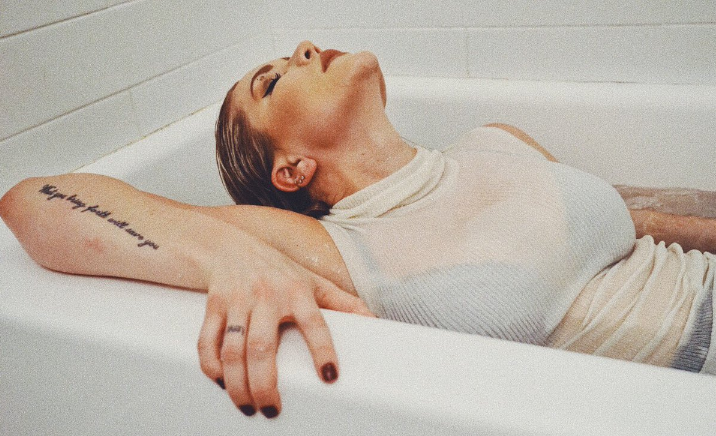 Co-written with its lead (and only on-screen) actor Sarah Zanotti, Kd Amond’s Faye strips the cinematic apparatus to its barest bones in its presentation of what is effectively is one long soliloquy, a character study of its title character as she wades her way through grief in search of the fragments of identity that might remain, albeit largely hidden from her traumatized view.

Zanotti’s Faye is a self-help author whose husband has recently died. Struggling with her new book, her agent somewhat desperately urges her to go on a writing retreat to her cabin in Louisiana. Hoping the isolation will help Faye to flourish, the opposite in fact happens as she spirals downwards, complicating factors such as alcohol, social media and broadly unstable mental health combining with the distinct feeling that she is accompanied by a supernatural presence.

Introducing horror elements into the story, the film takes somewhat of an abstracted turn away from the more polite dramatic terrain in which the film largely navigates. Structured across a series of chapters and intercutting between Faye’s experiences in the cabin and a spoken word performance on stage addressed directly to-camera, Zanotti and Amond invite us deep inside the mind of its eponymous character and her struggles, despair and, ultimately, hope.

While the horror aspects are perhaps the most novel of the film, they are curiously those which fit in the least, a somewhat inflated sojourn into generic territory that the film ultimately may not have benefited from or even needed. This aside, this performance-driven film is confident and captivating, and a nice reminder that not every movie needs to be dialled up to 11.