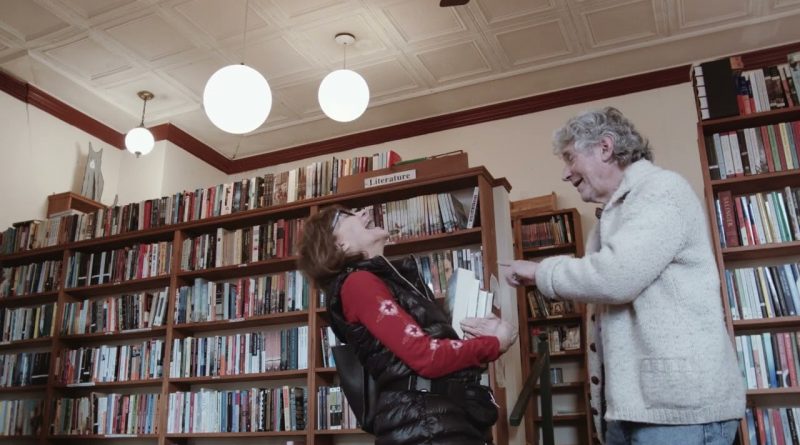 Matt Tannenbaum is all about stories. He loves telling them and living them, and for over 40 years, he has loved selling them through his beloved local institution, The Bookstore, in Lenox Massachusetts.

As far as recent economics are concerned, his is a common tale. As with many small businesses, the pandemic took a toll. When it hit, he shut down to browsing, and made sales through the closed door. What was once a thriving business (such as indie bookstores can be) became one struggling for survival. The Bookstore had been one of the hearts of the community, where folks gathered, visited with Tannenbaum, had some wine at his “Get Lit” wine bar, and maybe bought their new favorite novel.

Given that both he and his customers cherished The Bookstore, rather than closing for good, Tannenbaum put a call out for help on GoFundMe. His fans, friends, and customers did not disappoint.

Filmmaker and Berkshires resident A.B. Zax began filming his documentary Hello Bookstore, named for how Tannenbaum answered his many phone calls, in the fall of 2019. Zax’s initial aim was to capture how rare and important The Bookstore was, as well as profile the owner’s love of books and the readers who became extended family visiting the store.

Hello Bookstore amounts to a sort of slice of life doc that lazily flows much like the way time goes by when at a small indie bookstore. Many of the exchanges captured on film between Tannenbaum and his loyal clientele and friends are from that time, that pre-pandemic time. To those searching for new reads, he tells stories about the authors and the books themselves. He jokes to a buyer about the wine bar. “Our motto”, he says, “is you can’t drink all day if you don’t start in the morning.” I’m sure it was as much a surprise as to anyone that Zax wound up capturing the experience of this quirky bookstore owner as he navigated the pandemic and worked to keep the store, which struggled from closure, open.

The film doesn’t move in a chronological way. No doubt intentional, Zax shows Tannenbaum selling through his door, mask at the ready, then cuts to scenes of him chatting comfortably with old friends as he recommends the latest releases. Towards the end of the film we do see the immediate aftermath of the Go Fund Me campaign. It raised more than the $60,000 goal in less than 24 hours. In that way, certainly, small business owners who can relate to his struggles, folks who’ve been challenged in their own ways by the pandemic, and just people who need a bit of positivity will find hope, optimism, and a fraction of their faith in humanity restored by watching this documentary.

Hello Bookstore is a bit of a meander, and if that’s not the mood you’re in, you might find its homespun charm repetitive and tedious. For those, however, seeking to slow down and feel like they can almost smell the musty paperbacks, it will be like a meditation.