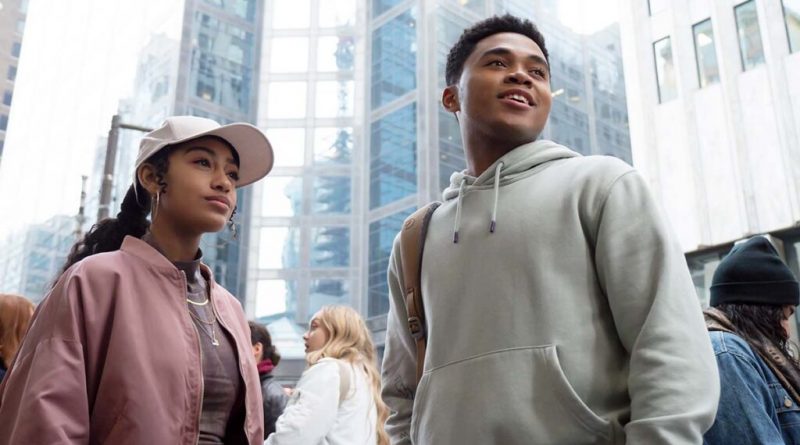 A hip-hop, gender-swapped twist on the classic fairy tale, the musical Sneakerella likely will appeal to young viewers and tweens, even if older viewers find parts of it a tough fit.

Debuting on Disney+ this month, Sneakerella assembles a charming young cast in a vibrant, candy-colored, and tidy version of New York City, right down to the sparkling clean subway cars and sidewalks. (I say that having lived in the city and still very much adoring the place.) Making her feature directing debut, TV veteran Elizabeth Allen Rosenbaum (Empire, Dead to Me) embraces the fairy dust, with artistic sketches that come to animated life, framing that rotates so the protagonist dances up walls, and both subtle and fantastical spurts of magic.

But at an hour and 51 minutes, it feels too long, especially in the home stretch where the machinations to keep El (Chosen Jacobs, Hawaii-Five-0) from his dream become creaky.

Still grieving his mother’s death, El helps his stepfather, Trey (Bryan Terrell Clark, TV’s Snowpiercer), run the store in Astoria, Queens, where his mother designed original footwear. She believed that sneakers were the windows to someone’s personality, if not their soul, and El has a knack for sizing up people based on their kicks. Unfortunately, Trey doesn’t care about this talent, or El’s artistic eye. He’s considering selling the store, which has fallen on hard times.

One day, El and his best buddy, Sami (a pitch perfect Devyn Nekoda, Utopia Falls), head into Manhattan for the release of the latest sneakers from former NBA star Darius King (John Salley, L.A.’s Finest). Unknown to them, they wind up in line next to King’s daughter Kira (Lexi Underwood, Little Fires Everywhere), who’s scoping out the crowd. One thing leads to another, and soon El is showing Kira the sights of his neighborhood, where their laces wind around each other in a sign of their budding attraction.

The script by David Light, Joseph Raso, George Gore II, and Mindy Stern largely keeps the mood light and bright. With encouragement from Sami, El designs sneakers to show to Kira before the launch of her father’s next line, hoping for the chance to save his mother’s store. The film makes them believably dazzling, but El bumps against his insecurity and sabotage from his stepbrothers (Kolton Stewart and Hayward Leach). The two oafs find this warm and winning depiction of Astoria too much to bear and want to hightail it back to New Jersey.

Sneakerella gives El a hand through Gustavo (Juan Chioran), the neighborhood gardener who whips up a classic convertible when El and Sami need a ride (along with formal wear that amusingly falls off the back of a truck). The family conflict causes the plot to drag as it shoehorns obstacles into El’s way. But the songs and dance numbers are lively, and the well-worn message that you’re rewarded for being yourself is as comforting as a favorite slipper.