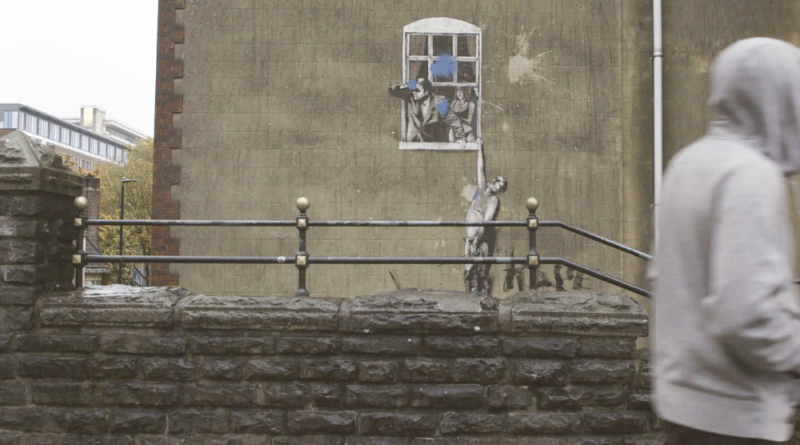 The very name Banksy conjures up the talented, mysterious graffiti artist whose politically charged work has fascinated many since the 1990s. He or she is now the subject of writer/directors Aurélia Rouvier and Seamus Haley’s documentary Banksy Most Wanted which surveys this artist’s work, their social critiques, and investigations for the actual Banksy with consideration of several theories.

With twice as many Instagram followers as the Louvre, Bansky has only grown in fame since he first tagged his works in Bristol, grabbing attention for his refusal to “play by society’s rules,” as several note. With painting on walls regarded as criminal, vital anonymity became both Banksy’s trademark and his badge of honor. Amplifying his roguish reputation, he has infiltrated eight different museums (in Paris, London, and New York) between 2003 and 2005 to place paintings on the walls.

The documentary profile begins at Sotheby’s with the now infamous shredding of “Girl with Balloon” after it sold for $1.4 million. As significant as his unconventional actions are the inescapable, extensive political commentaries communicated and publicized by stenciled art shown here and characteristic of Banksy’s work; for example, The Flower Thrower, Dismaland, Art Buff, and Girl with a Pierced Eardrum. This nonjudgmental exploration also includes notable contemporary interviewees: Steve Lazarides, Banksy’s agent from 1997 to 2008; art dealer Robin Barton, infamous for extracting and selling stenciled wall art; and three investigators, each certain they’ve discovered the real Banksy. Taking exception to those certainties, former Bristol mayor George Ferguson argues, “I think we’d lose some of the magic if somebody were to reveal who he is.”

Banksy Most Wanted meanders through its two primary topics: Banksy’s identity and the reception of his art. It circles back to Girl with Balloon without adding any new insights, and those who argue they’ve discovered the real person merit more extensive questioning, saving them from sounding cavalier. In other words, a thorough re-edit would have improved Banksy Most Wanted, in which the fragmented, inconclusive hunt for Banksy seems to have guided and imprinted this work as well.

To be fair, weighty issues are raised, but they merited further discussion instead of casual treatment; for example, the value of traditional versus innovative art, those obsessed with Bansky’s identity, whether his stenciled walls should remain in place, and his political critiques. Still, Bansky enjoys such iconic status that even this superficial treatment entertains. And quite rightly, Bansky, as he so often does, gets the last word with a closing quotation on screen: “If you want to say something and have people listen, then you have to wear a mask.” That’s worth thinking about as well. Primarily in English with some French with English subtitles.