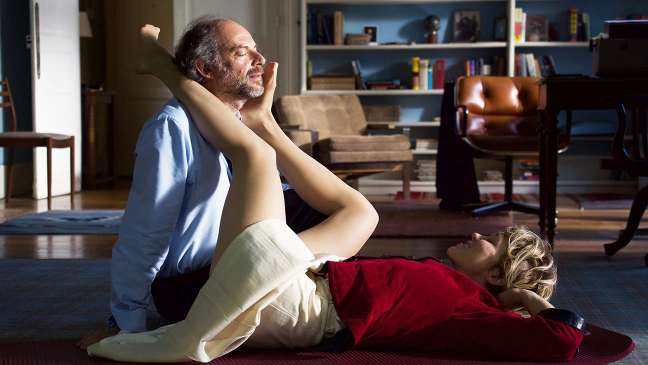 It helps, but is not mandatory, to know something about the work of author Philip Roth when viewing this adaptation of his novel, Deception. The book is mostly dialog between its two main characters so any attempt at translating it to film is a daring project. Director Arnaud Desplechin takes it on with a strong sense of the rhythmic nature of the give and take between the two lovers that make up the plot. However, the underlying themes of self-loathing and obsession bog down the story, making it feel stifling and static at times.

This might very well be more the flaws of the novel becoming apparent on screen rather than any lack of skill on the part of the director. Roth was well known for being critical in his assessment of himself and other Jewish-Americans. In Deception, he gives the protagonist his own name but this does nothing to make him more likable. He is a married man carrying on an affair with a married woman, cloistering the two of them in the convenience of his writing studio away from his home.

There is an underlying theme of control and domination in the film as Philip (Denis Podalydes) keeps his lover behind closed doors and doesn’t even refer to her by name at any time. She is anonymous and mysterious with few details of her life away from him revealed, and it seems that is exactly how he likes her to be. However, Lea Seydoux is riveting as his partner in adultery with her smoldering sexuality and a lingering sadness that is suggested with downcast eyes and an occasional pout. Unhappy with her marriage but as a mother of a young child, her character seems to be looking for solace and escape. In turn, Philip seems to feed on her emotions as fuel for his writing.

At one point, Philip’s lover says, “I feel so urgently the need for solitude” and the writing studio goes dark. Deception is a dark story of unhappy people struggling to find fleeting moments of comfort with each other, knowing that they are also hurting others in their betrayal of trust. Seydoux carries the film with her seductive smile and laughing eyes but Podalydes has the harder role in trying to make Philip at least sympathetic, if not somewhat understandable.

Deception is a well-made film looking for a story about kinder, more likable people to frame in its warm, refracted lighting and soft, muted colors.