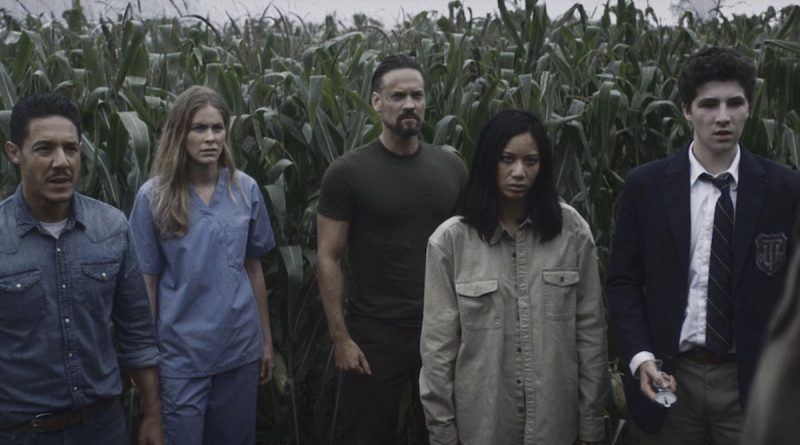 Escape the Field: I’d say it has not that much horror, but it is not that horrible.

Six strangers mysteriously wake up in a remote and seemingly endless cornfield that is in an unknown location. They are void of all possessions except for a gun with a single bullet, a knife, a compass, a lantern, a box of matches and a flask of water. If they work together, they might be able to use this limited collection of items to solve their very puzzling predicament and work their way out of the mystery-laden situation.

This group of six is basically trapped in an outdoor escape room and they must find a way to break free before an unknown bogey man gets them. Think of Escape the Field as Clue in a cornfield. It’s Survivor meets Lost. It’s The Hunt in the Twilight Zone.

Escape the Field is what I call a fruit salad film: it’s a big bowl of plots pulled from bunches of horror flicks that never come to fruition because someone left all the seeds in the watermelon. The whole time you are watching this movie you have the feeling you’ve seen it before. Escape the Field is light on scares and thin on character development while being heavy on mediocre dialogue and choppy editing, but the mostly unknown cast is somewhat likable and at only 88 minutes, it’s an interesting enough brain teaser. Stay through the credits for another piece to add to the puzzle. In theaters and on demand.