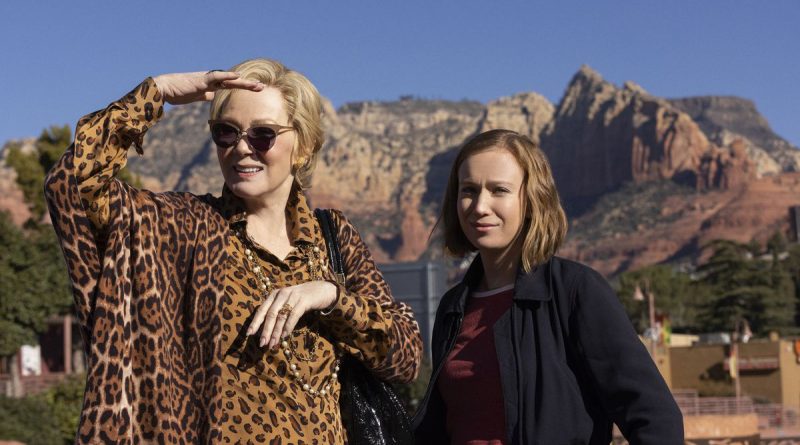 Season 1 of HBO’s tragi-comedy Hacks ended with a vendetta: young Ava Daniels e-mailed a philippic to entertainment critics, outlining the viciousness of her boss, old Deborah Vance. Vance is a veteran of stand-up comedy whose audience is slimming so that even her QVC profits do not make up the difference on her ledger.

Deborah hired young Ava to beef up her jokes. The two circled the drain in Season 1. Now, they’re circling the states. Singing along with Linda Rondstadt’s You’re No Good, Deborah goes picaresque in a coach with a pink DV on the side. Deborah has the suite; Ava, the upper bunk. While trying out new material and tossing punch lines like, well, punches, the two head east from Deborah’s desert in Las Vegas.

They go to a fair and a yard sale. They take a cruise, which causes Deborah to rethink her appeal to the homosexual crowd, for this cruise carries Lesbians who are not charmed by Deborah’s Joan Rivers’ self-deprecation. Meanwhile, Deborah’s staff, especially her majordomo Marcus, is left abandoned and bewildered.

Through admirable editing, the roadsters’ life contrasts with the office staff’s. That editing includes a series of bows in a series of cities and a flashback to Deborah’s young motherhood. Season 2’s episodes also offer good directing (eight by Lucia Aniello).

The writing in Season 2 is just as sharp as in the mother series. When Ava asks Deborah how many stalkers she actually has, Deborah fires back: “Living?” Ava and Deborah develop into characters who mesh more often than they abrade. They talk sex. One sues and one teaches the other to float. They laugh at each other’s lines. Or not. The subplots introduce strong storylines, including Ava’s burden of her father’s ashes and, at the fair, Deborah’s finding a woman she’d betrayed years before.

Guest star Harriet Sansom Harris is warm and wonderful as the defeated comic; equally brilliant is Laurie Metcalf, all arms and lip, playing commander of the schedule and the coach. They join the brilliant supporting cast: Jane Adams as Ava’s mother, who’s worse than her boss; Carl Clemons-Hopkins as Marcus, Ming-Na Wen, Luenell as Marcus’ crazy auntie, Paul Downs as Jimmy, and Megan Stalter as his entitled clerk.

Leading the pack are Jean Smart and Hannah Einbinder. They know how to dance the waltz and La Dance Apache. They offer a master class in duets.